The memorial is in Nechanice village

Stone. There is a relief of peasant rider and inscription carved in the memorial The dimension is approximately 1,7 x 0,7 m.

The memorial was unveiled on 5 July 2010. It was an initiatie of Janák's East Bohemian Riding School in Nechanice on the occasion of the 85th anniversary of the Peasant Rides and the commemoration of the events of 1947. At that time the Communist Ministryof Interioir banned the the horses races, whih were organised by the Peasent ride in Nechanice and also  deployed security units. The so-called Nechanice Affair was a prelude to the Communist Party's takeover of power in February 1948. Many former political prisoners, peasants, politicians and the public participated in the unveiling of the monument.

Annual event is organising on site as a commemoration of the peasant rie in Nechanice in  1947. The event is organised by the local peasent ride organisation. It is attended by witnesses, politicians and the public. There is also a ceremonial parade of peasant riding here. 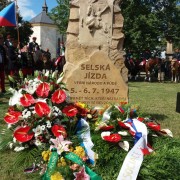 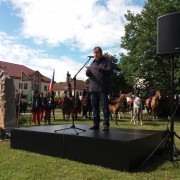