The plaque is located on the building of the Town Hall in České Budějovice.

The liberator of the nation, Tomáš Garrique Masaryk, was enthusiastically greeted by the South Bohemian people on his victorious return to their homeland on December 20, 1918. Masaryk's plaque was later destroyed by the occupants. Restored  in 1946 in its original form by Českobudějovická spořitelna.

The bronze plate with dimensions of 80 x 80 cm has a bust of TGM at its top and the national emblem of Czechoslovakia in the middle.

The author of the work are Karel Chochola and Jan Vítězslav Dušek. It was unveiled in 1935. The work was made by České Budějovice savings bank.

The memorial commemorates the speech of Tomáš Garrique Masaryk, who delivered a speech on the square in České Budějovice on 20 December 1918 after his return from America to the newly formed Czechoslovakia. It was the first speech he made in the newly formed republic. The board was destroyed during the WWII, restored in 1946. After the communist coup in 1948 it was removed and reinstalled in 1990.

Tomas Garrique Masaryk was the first Czechoslovak president. He contributed to the establishment of Czechoslovakia after the First World War. After the establishment of the Protectorate of Bohemia and Moravia in 1939, his statues were removed and returned to the public space after World War II. After the Communist takeover in 1948, they were removed again, and his importance was not allowed to be taught in schools or publicly spoken. This situation lasted until 1990. 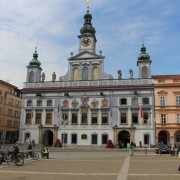 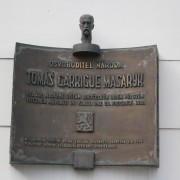