Václav Morávek together with Josef Balabán and Josef Mašín formed a resistance group called Three Kings. March 21, 1942 in an attempt to free his courier from the Gestapo hands succumbed in battle outnumbered and died.

The monument is in the place where Václav Morávek died in the fight and outnumbered by the Gestapo police.

The memorial consists of an original plaque from 1946, on which the inscription in gold letters and three blocks of stones. The smallest one has 150 cm second 180 cm and third 200 cm. They symbolize the "three kings" who confronted the Gestapo.

The monument was unveiled in 1946. It consisted of a granite slab with one polished side on which is the inscription in gold letters. In 2009, due to the construction of the Blanka tunnel, the board was transferred and returned back to the modified site on 6 October 2014. Three stone blocks were added to the 80 x 50 cm board symbolizing the resistance group of the Three Kings - Josef Balabán, Václav Morávek and Josef Mašín.

The monument is approximately in the place of the heroic struggle of Václav Morávek with the superiority of the Gestapo. The plaque of the monument was unveiled as early as 1946 in 2014, and three stone blocks reminded it of its comrades. Václav Morávek was one of the most important resistance fighters during the Protectorate of Bohemia and Moravia. He organized sabotage operations, he was the Sparta 2 radio operator and he received information from a major spy in the German Abwehr Paul Thümmel. In the memorial is regularly held commemorative events and ceremonies.

The resistance group called the Three Kings consisted of Josef Mašín, Josef Balabán and Václav Morávek, they cooperated with the domestic resistance, maintained contacts with the government in London exile and carried out sabotage actions in the German Empire. The last who died was Václav Morávek trying to free his courier from captivity by the Gestapo. Two months later, Jan Kubiš and Jozef Gabčík assassinated Deputy Protector Reinhard Heydrich. It was the most significant resistance act during the whole World War II. These events are regularly commemorated at the time of the anniversary of the end of the war or the death of Václav Morávek. The monument is listed in tourist guides and marked and maps. 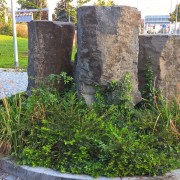 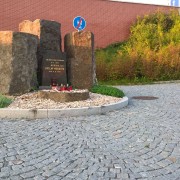 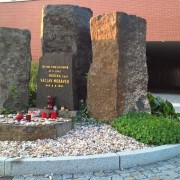