Monument to the victims of Nazism (Praha, Střížkov)

The monument is located in the Ďáblice cemetery in the place of mass graves of victims of Nazism.

Granite stele 2 m high with smooth curved front wall on which is placed the inscription and the Czechoslovak lion.

The memorial was unveiled on 17 June 2008 in the presence of the Vice-President of the Senate of the Parliament of the Czech Republic MVDr. Jiří Liška. About eight thousand unidentified people, including heroes of the anti-Nazi resistance movement, are buried in the place where the monument is located.

There are regularly held reverent meetings. Several citizens' initiatives draw attention to the dignity of the situation in which the greatest heroes of the anti-Nazi revolt lie in unidentified common graves near their executioners.

The victims of anti-Nazi resistance deserve the highest respect. Often they were young people who voluntarily voted for death before disclosing information to the enemy, or entire families were executed to help the resistance fighters and skydivers. Respect for people who gave their lives in the struggle for freedom is an essential element in shaping society consciousness 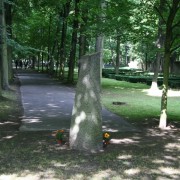 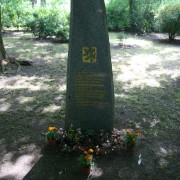 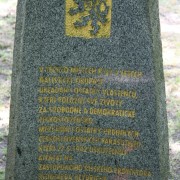