The monument is dedicated to the Minister of Foreign Affairs of the Kingdom of the Netherlands, who met on March 1, 1977 with Mr Jan Patočka, the spokesman of Charter 77.

The monument is located is located in the park and consists of a concrete imprint of the shadow of a tree.

The monument represents the materialized shadow of the tree.

The Embassy of the Kingdom of the Netherlands initiated the creation of a memorial commemorating the first meeting of a Charter 77 spokesman with a major Western policy. The monument is the work of sculptor Dominik Lang and architect Jakub Červenka.

Representatives of the Dutch Embassy, ​​journalist Dick Verkijk, the first Vice-President of the European Commission Frans Timmermans and the Minister of Foreign Affairs of the Czech Republic Lubomír Zaorálek participated in the unveiling of the monument. Jan Patočka's meeting with Van der Stoel meant a significant strengthening of the spirit of Charter 77 signatories who were subjected to extensive persecutions by the State Security.

Philosopher Jan Patočka was repeatedly interrogated and bullied by the State Security after meeting with Max van der Stoel and died on 13 March 1977 as a result of this abusive treatment. The meeting of both men took place in the Intercontinental Hotel and this meeting was a great moral support for the Czechoslovak dissidents. 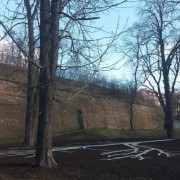 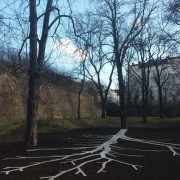 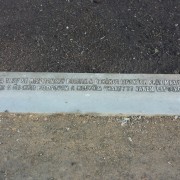