Fountain in place of Soviet tank

Anti-Nazi Resistance and Rebellion in Prague in May 1945

The Fountain of the Time displays a broken stone from which water rises. Earth and water element symbol. Material stone and water.

Originally, the Soviet tank IS2M was unveiled here on July 29, 1945, who was one of the first to arrive in Prague on the morning of May 9, 1945. After the November Revolution, on May 16, 1991, the tank was painted with pink color by the artist David Černý. In 2002, a fountain was built in this place, designed by architect Jan Lauda. The initiator was the City Hall of Prague 5.

The original appearance of the site with the IS 2M tank lasted from June 1945 until 1992, when the tank was taken to the museum in Lošany. Tank accidentally carried the symbolic number 23. In 1945, the Soviet Army left Czechoslovakia to 23 years later occupied in August 1968. 23 years later in 1991, the occupation troops definitively left Czechoslovakia. Since 2002, the place has been decorated with a fountain called The Grave of Time, related to the opposite road by a Soviet tank with occupation symbols buried in the ground.

The original appearance of the place was created after World War II as an expression of thanks to the Soviet Army for the fight with Nazi Germany. After the Communist takeover in February 1948, commemorations and speeches of Communist leaders were held on the occasion of the end of World War II. After the occupation in August 1968, the tank was a symbol of the occupation army of the USSR. Therefore, it was replaced by a fountain symbolizing the broken ground from which water jets, as a symbol of variability over time. 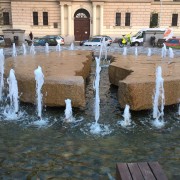 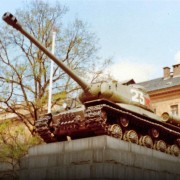 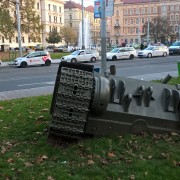