Monument to paratroopers of the Anthropoid group

The monument is dedicated to Jan Kubiš and Jozef Gabčík, who on 27 May 1942 carried out an assassination of Reinhard Heydrich.

The monument is in the location of Anthropoid group landing site.

Sandstone stele 200 cm high on which is placed marble plate with an inscription.

The memorial was unveiled on December 29, 2016 at the seventy-fifth anniversary of the paratroopers landing into the Protectorate of Bohemia and Moravia. The members of the company „Nazdar“ were attended.

The assassination of Reyndhard Heydrich is one of the most significant resistance act of WWII. Several books have been published about Operation Anthropoid, as the event was called, and two feature films were made. There are regular commemorative and commemorative events at the memorial day.

Reynhard Heydrich was man # 2 in the Nazi security apparatus. His killing was the most significant resistance act in World War II. It was achieved thanks to the underground resistance movement and the determination and courage of paratroopers. This resistance act is commemorated annually at several reverent gatherings. 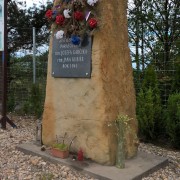 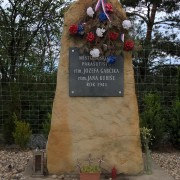 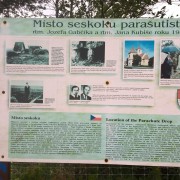