Commemorative plaque to victims of the communist secret police

The plaque is placed on the wall of the object in which the cruelest torture chamber of the communist secret service was located.

In memory of victims tortured by the communist police.

The plaque was unveiled by the initiative of the Czech Confederation of the Political Prisoners in 1990.

The plaque has a row of thorns for hanging wreaths. There are regularly held memorial gatherings on the day of war veterans and other important memorial days. The little house („Domeček“) as it was called the torture chamber was the most terrifying object in Czechoslovakia at the turn of the 1940s and 1950s.

In the secret investigative prison, in which the sadist Cpt. František Pergl worked, was tortured and investigated about 300 Czechoslovak soldiers, mainly officers participating in the Second World War. People were brutally interrogated and forced to sign confessed confessions. Cpt. Pergl superior Gen. Musil was later executed by the Communists. 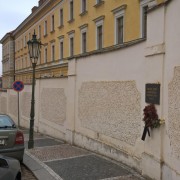 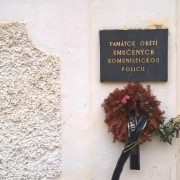 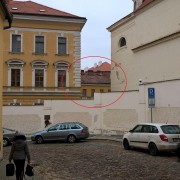