Monument to Polish Victory at the Oder River

The monument commemorates the battle of Cedynia (there are doubts about the place of the battle), which took place in 972. The army of Polans under the command of Mieszko I and his brother Czcibor defeated the army of Margrave Hodon, Margrave of Lusatian March.

The monument stands on Czcibor Hill, located on the road between Osinów Dolny and Cedynia.

On the 1000th anniversary of the victorious Battle of Cedynia fought in defense of the Polish lands on the Oder and Baltic Sea by Mieszko I and his brother Czcibor with the armies of Margrave Hodon. This monument was built in June 1972. [also inscription with the same content in Russian, English and German]

The monument was made by sculptors Czesław Wronka and Stanisław Biżek. It was unveiled on the 1000th anniversary of the battle - 24 June 1972. It was accompanied by a ceremony attended by 50 thousand people, representatives of social organizations, the army and the authorities, including the Deputy Minister of National Defence, General Józef Urbanowicz and the Minister of Education and Upbringing, Jerzy Kuberski. During the ceremony, the relations between the Western lands and Poland were strongly emphasized and it was stressed that the Oder was and should be the Polish-German border.

The monument was supposed to remind us that since the early Middle Ages the Polish state had been basing the border on the Oder River and effectively defending it against German aggression. Emphasizing Western Pomerania's belonging to the state of Mieszko I was to justify Poland's historical rationale for this land. This was particularly important after 1945, when the territory was incorporated into Poland. In the context of the Battle of Cedynia, the forcing of the Oder River under the nearby Siekierki in 1945, in which the 1st Polish Army participated (it was part of the Berlin operation), was also recalled. Both battles were presented as elements of the same historical process that had lasted for 1000 years: the fights of Poles for Western Pomerania, which eventually ended in their victory with the help of the USSR.

After 1989, the monument no longer functions as an important memorial. The monument and the hill is rather a local tourist attraction. There is a parking lot under the monument to leave the car for tourists who want to see the monument. Near the monument there are also annual stagings of the battle. 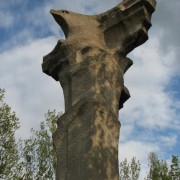 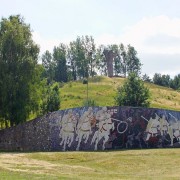 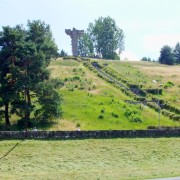