Ciechocinek, Romualda Traugutta Street, on the square in the Zdrojowy Park between Tadeusz Kościuszki and Józef Piłsudski streets.

Originally, the monument consisted of a two-part stone pedestal set on two steps. On a slightly wider and three times smaller base, the main part of the pedestal was set in the shape of a prism, on whose front wall, at the top, a bust of Romuald Traugutt carved in the form of a medallion was placed, below his name and dates of birth and death were engraved. At the top of the pedestal there was a statue of an eagle (without a crown), which was breaking off to fly, based on three steps narrowing towards the top. The total height of the whole is about 4.5 m. Around the monument there are 16 granite balls on the elevation, connected by a chain. After the World War II the monument was rebuilt in a changed form. Just like before, the monument stands on a two-stage elevation. On a column-shaped pedestal, set on a wider, prism-shaped base, an eagle similar to the pre-war original was placed, and on the base of the pedestal there was a board with a slightly changed inscription.  The image of Traugutt was not reproduced. The height of the monument is about 6.5 m. Around the monument 4 granite balls were placed on the elevation.

After the visit of Romuald Traugutt's daughter Anna Juszkiewiczowa to Ciechocinek in 1928, it was decided to erect a monument to his memory. In 1929, Dr. Leonard Lorentowicz was elected president of the Monument Construction Committee of Romuald Traugutt. The author of the project was Eng. P. Pallado. Funds were raised, among others, during a collection at a specially organized concert and ball. Among the donors was Józef Piłsudski, who donated 100 zloty for the construction of the monument. The monument to Romuald Traugutt was ceremonially unveiled on 18 August 1929. The unveiling was performed by Traugutt's daughter, among others. From the remaining sum a permanent scholarship was funded for the best students of the local school.

After being destroyed during the World War II it was rebuilt and unveiled in May 1945. The pedestal was changed and there is no image of Traugutt. The white column shows the insurgent eagle in the crown. On 22 January 2018, the 155th anniversary of the outbreak of the January Uprising, flowers at the monument were laid by the President of the Republic of Poland Andrzej Duda.

Thanks to its location in the central part of the city, the monument is a place of frequent meetings and is visited by tourists. On the anniversary of the outbreak of the January Uprising, the inhabitants light candles in this place. Patriotic celebrations are held here. 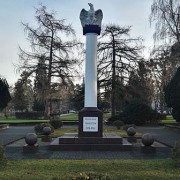