The monument is dedicated to Rev. Ignacy Skorupka, who died in the Battle of Warsaw, which was fought on 13-25 August 1920 during the Polish-Bolshevik war, which was decisive for the preservation of Poland's independence and which put an end to plans to spread communism to Western Europe.

The monument stands in the village of Ossów, about 20 km from the center of Warsaw.

In defense of the Homeland, leading the soldiers to the attack, Rev. major Ignacy Jan Skorupka, chaplain of the 236th regiment of the academic legion, died a heroic death. We gave our soul and body for our native rights, calling God to be gracious to our nation. The founder of the construction of the monument Marian Jeznach.

The monument has the shape of a simple obelisk erected on a quadrilateral granite pedestal. The obelisk is decorated with a metal cross and the Polish emblem and the Virtuti Militari Order. Flagpoles, information boards and benches are also a part of the monument.

Rev. Ignacy Skorupka was chaplain of the 236th Volunteer Infantry Regiment of the Academic Legion, consisting mainly of junior high school students and students. He joined the army as a volunteer to take part in the defence of Warsaw against the approaching Bolsheviks. He died on August 14, 1920 in the battle of Ossow from a shot in the head, giving the wounded the last anointing. In this battle the Bolsheviks were repulsed. It was the first defeat of the Red Army in the Battle of Warsaw. The solemn funeral, which took place during the battle, was attended by the highest clergy, representatives of authorities, generals and crowds of people. Shortly after his death a legend was born, according to which he was to mobilize his comrades-in-arms to fight in a moment of doubt and led them to attack in a hundred and with the cross in hand, going to a certain death. This is how he was recorded in the painting. His death became one of the symbols of the Warsaw Battle and an element of the legend of the 'Miracle on the Vistula', according to which victory was the result of a miracle and not a counter-attack plan by Józef Piłsudski (such a version was used for political struggle by Piłsudski's opponents). In 1921, in Ossów, in the alleged place of priest Skorupka's death, a cross with an information board was erected. The obelisk was erected on 4 June 1939 near the house to which the body of Reverend Skorupka was moved after the battle. The ceremony took place during the regiment holiday of the 36th Infantry Regiment of the Academic Legion, the founder of the monument in the setting of the military ceremony. The monument was unveiled by General Mieczysław Trojanowski and the field mass was celebrated by Bishop Józef Gawlina.

In 1981 or 1982, thanks to the involvement of Ossow resident Marian Jeznach, a participant in the Polish-Bolshevik war, the obelisk was renovated. The next renovation of the monument (together with its surroundings) was carried out in 2017 by the Local Government Cultural Institution and the Ministry of Culture and National Heritage (a communal unit) as a part of the task 'The Place of Fight and Death of Heroes 1920 - Renovation of Father Ignacy Skorupka's obelisk in Ossów', in the 'Cultural Heritage' program, co-financed by the Minister of Culture and National Heritage.

The obelisk is a part of the cultural park "Ossów - Gate of the Battle of Warsaw 1920" established in 2009:

- cross (a significant place where the Bolsheviks have reached)

- exhibition pavilion 'Panorama Ossowska' - at the school in Ossow (with a permanent exposition of models of the 1920 war and maps, photographs and souvenirs related to the battle)

- plaque dedicated to the Hungarians who in 1920 supported the Poles fighting against the Bolsheviks.

The institution aims to preserve the memory and knowledge of the Polish-Bolshevik war (1919-1921), acting in the areas of historical education, tourism and culture. Local governments and the local community are involved in the project. The heart of the cultural park was to be the Museum of the Warsaw Battle in Ossów as a branch of the Polish Army Museum. However, until 2019 the project was not completed. Every year on August 15th, anniversary celebrations are held around the buildings of the cultural park. A form of commemorating the battle is, among other things, a historical reconstruction (open-air spectacle) with the participation of the army, attracting thousands of spectators (residents and tourists of all ages) and a historical picnic with attractions for children. The obelisk is located on the tourist 'Warsaw Battle Route', connecting 11 villages, inaugurated in November 2015. 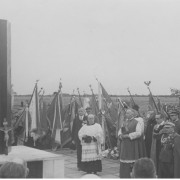 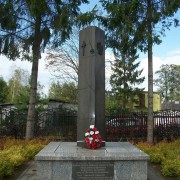