Monument to the Victims of Smolensk Tragedy 2010

The monument commemorates 96 victims of the 2010 crash of the Polish Tu-154M plane in Smolensk.

The monument is located at Marshall Józef Piłsudski Square in Warsaw, near the Tomb of the Unknown Soldier.

The monument is 14.5 m by 7.5 m. It was designed by the sculptor Jerzy Kalina. It has a form of a block covered with black granite. It refers to an airplane gangway, plane stabilizer and catafalque. The monument consists of a 2 m deep underground part, symbolizing the "death pits" in Katyn, covered with a glass ceiling. The ground part of the monument is 6 m high. The names of 96 victims are engraved on its front wall.

The monument was funded by the 'Social Committee for Monument Construction: The late President of the Republic of Poland Lech Kaczyński and Victims of the Smolensk Tragedy 2010'. Work on the monument began in February 2018 when the Mazovian Voivode Zdzisław Sipiera gave his consent to its construction, despite the fact that the Council of Warsaw had not previously given its consent to its construction on this site. In October 2017, Andrzej Adamczyk, Minister of Infrastructure and Construction, issued a decision to remove the square from the city's custody and place it at the disposal of the voivode. The monument was unveiled on 10 April 2018, on the eighth anniversary of the catastrophe, by representatives of some families of the victims of the Smolensk disaster: Jarosław Kaczyński, Marta Kaczyńska and her daughters, Ewa Kochanowska, Andrzej Melak and Małgorzata Wassermann. The ceremony was also attended by representatives of the highest state authorities, including President Andrzej Duda with his wife and Prime Minister Mateusz Morawiecki, Marshals of the Sejm Marek Kuchciński and Senate Stanisław Karczewski, MPs and clergy. The dedication of the monument was performed by Cardinal Kazimierz Nycz in the presence of the prelate Bogdan Bartold, parish priest of St John the Baptist Archcathedral. The commemorative speeches were made by President Lech Kaczyński's brother Jarosław Kaczyński and President Andrzej Duda.

In December 2018, the completion of works related to the Monument to the Victims of the Smolensk Tragedy 2010 was announced, including the addition of a symbolic wall of greenery and a historical cross, which was erected in Warsaw in front of the Presidential Palace after the tragedy. Several times there have been minor incidents at the monument, among others, in April 2018 a man under the influence of alcohol tried to enter the monument; in March 2019 the police detained two teenagers who used the monument to perform tricks on scooters; in May 2019 the man ran into the monument and developed a banner with the slogan "Ein Reich, Ein Volk, Ein Kaczyński". He was pulled from the monument by the police.

One of the most important monuments unveiled in the 21st century. The monument, as well as the assessment of the causes of the Smolensk catastrophe is the subject of political dispute and public debate. In front of the monument are held ceremonies commemorating the victims of the plane crash. 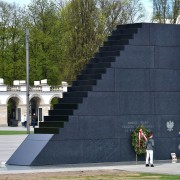