The monument commemorates the king of Poland (1674-1696) John III Sobieski, the slayer of the Turkish army near Vienna in 1683.

The Jan III Sobieski Monument is located in the centre of Gdańsk on one of the main squares of the Old Town - the Tree Market (in the place of the removed monumental German monument).

The inscriptions on the boards: "To King John III the city of Lwow MDCCCXCVIII"

A statue of a mounted rider, cast in bronze on a sandstone plinth. The monarch, dressed in traditional aristocratic costume, sits on a climbed steed and extends his hand with a bun in his hand. Under the horse's hooves, a shattered cannon and a bunting topped with a crescent, a symbol of Islam. On the pedestal of the monument there are two plaques: the first one with a dedication, the second one with a description of the battlefields under the command of Jan III Sobieski. The height of the monument: over 8 meters.

The monument was founded by the city of Lwow. First unveiled on November 20, 1898, in Lwow on the square in Wały Hetmanich, by Lwow sculptor Tadeusz Barącz. The artist did his work in a social act, he only demanded reimbursement of material costs and payment for helpers.  The base of the monument, made of grey sandstone, was made by the sculptor Julian Markowski from Lwow. In July 1944, when Lwów was once again occupied by the USSR, a project was created to transform Sobieski's figure into Bohdan Chmielnicki. Finally, in 1950 the monument was handed over to the Polish authorities. For 16 years it stood in the park in Wilanów in Warsaw and was transported to Gdańsk. The monument was unveiled again in Gdańsk on 26 June 1965 at the Tree Market. The king is facing west. Until 1946 there was another monument in this place, in honour of the fallen soldiers from Gdańsk and the surrounding area who died during the wars waged by Prussia in the 19th century: with Denmark, Austria and France.

The original plaque with the text "King John III the City of Lwow" was hidden and installed only after 1989. Just like for pre-war Lwów residents, also for the post-war inhabitants of Gdańsk the Sobieski monument became a symbol of freedom. In the 1970s and 1980s anti-communist demonstrations were organized here, brutally dispersed by the police and the Security Service. In 1999-2000 the monument received an illumination. In 2019, it is planned to install a fountain at the monument, consisting of 2 shallow two-centimetre long water basins, over 11 m long and up to 2.8 m wide.

At present, the monument is primarily used for public holiday celebrations. It is also one of the most popular objects photographed by tourists in Gdańsk. 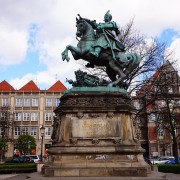