The monument commemorates the death of General Werner von Fritsch - former commander-in-chief of the German land forces and the highest ranked Wehrmacht officer who died during the German aggression on Poland in 1939.

The obelisk was located in today's Łodygowa Street, in the Targówek district of Zacisze, which was then a suburb of Warsaw.

The granite, modest obelisk had the form of an irregularly shaped tombstone. The general's sabre was buried under the monument, and a garden surrounded by a wall was set up around it and an alleyway with decorative shrubs was created.

General Werner von Fritsch, after the conflict with Adolf Hitler and his closest associates, lost his position as commander-in-chief of the land forces and was deprived of influence on the army. During the 1939 campaign, he found himself near Warsaw as the honorary commander of the 12th Artillery Regiment, which meant the role of a passive observer. According to the account of the general's adjutant, he was looking for death on the battlefield. He died in the Prague suburb of Warsaw on September 22, 1939, after being hit by a bullet probably from a Polish machine gun. In Berlin Hitler arranged a solemn funeral for the fallen general, and an obelisk was erected near the place where von Fritsch died. The monument was situated on a square surrounded by a wall and an alleyway planted on both sides with decorative bushes was led to it.

At the monument to General Werner von Fritsch on the anniversary of his death and the end of the September campaign, the Wehrmacht organized local celebrations. During the most festive events on October 6, 1940, the 12th Army Commander, Marshal Wilhelm List and the General Governor of the occupied Polish territory, Hans Frank, appeared. The obelisk survived until September 1944, when it was destroyed by a shell fired by a Soviet tank. Less probable version says about the destruction of the monument by Warsaw insurgents. After the war, the remaining of the monument were cleaned up and taken away. Currently, there are buildings located between the petrol station and Potulicka Street.

The Werner von Fritsch monument played an important role as a memorial for the Germans in several respects. It was a symbol of domination in the occupied Polish lands and a reminder of the victorious September campaign. At the same time, it worshipped the fallen general, who grew to the rank of a hero thanks to his death from an enemy bullet. This perfectly fitted in with the legend of the heroic Wehrmacht.  For Poles, the von Fritsch monument became one of many symbols of the German occupation. When it was destroyed, the memory of the monument was quickly blurred. 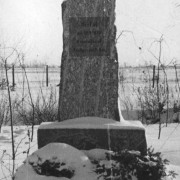 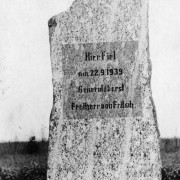 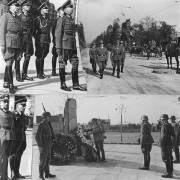