The monument to General Józef Bem is located on Wałowa Street, on a small square named after him. It is against the background of the former defensive walls. On the left side of the monument there is a tenement house. On one of its walls you can see a mural created by Anna Kropiowska with a fragment of the Panorama of Transylvania, depicting General Józef Bem and his companions on the day of the Battle of Sibiune on 11 March 1849. Next to the mural, a bench of Polish-Hungarian friendship was erected. The town received it during the National Pilgrimage of Hungarians to Tarnów. It was placed there on 28 June 2018. On its base there are coats of arms of Poland and Hungary.

The inscription on the pedestal: General Józef Bem Tarnowian The hero of Poland and Hungary

The inscription on the back: The monument was erected thanks to the efforts of the Tarnów Society of Friends of Hungary, Polish and Hungarian society with the support of the State Fund for Plastic Procurement of the City of Tarnów. Authors of the monument Bogdan Ligęza-Drwal and Stefan Niedorezo. The casting was made by Roman Sapa and son. Assembly of the Tarnów Nitrogen Works. Plinth design by Otto Schier. Made by Eugeniusz Kłak. Tarnów 11 May 1985.

The bronze monument is 2.5 m high and stands on a granite pedestal. It shows Bem dressed in a Hungarian uniform, with the Hungarian Order of Merit of First Class, covered with a long coat with a fur collar and a hat with a plume. The general holds the handle with his right hand and the left head sticking out from under his sabre coat as if he was preparing to attack.

The postulate to commemorate Józef Bem, a person born in Tarnów, was put forward by the Tarnów based weekly magazine "Pogoń" in 1881. Soon, a social committee for the construction of the monument was established, which was to be unveiled in 1883 on the 200th anniversary of The Relief of Vienna, which spread the news to the Austrian authorities. The governor of Galicia, Alfred Potocki, banned the fundraising. The idea of building the monument revived after Poland regained its independence. However, when the General's ashes were brought to Tarnów in 1929, a mausoleum in Strzelce Park was built instead of a monument. The monument was remembered in 1956 because of the new (this time anti-Soviet) uprising in Hungary. The fundraising was initiated by the Tarnów Society of Friends of Hungary. However, it received permission from the authorities to do so only in 1966. The monument was granted by the municipal authorities in April 1984. The project was prepared by Bogdana Ligęza-Drwal, a sculptor from Tarnów and Stefan Niedorezo, a graduate of the Academy of Fine Arts in Kraków. Their work aroused controversy because Bem was wearing a Hungarian uniform and not a Polish one. Nevertheless, the monument stood on a pedestal designed by architect Otto Schier. The casting of the sculpture was entrusted to Tarnów Casting Plant of Roman Sapa and his son Bogdan. The ceremonial unveiling took place on 11 May 1985. Apart from the local authorities, a Hungarian delegation from Bacs-Kiskun province and the town of Kiskörös participated in it.

Tarnów, thanks to the legendary figure of Józef Bem, is a city frequently visited by Hungarians. They willingly peregrinate to the place where the hero of two nations was born. The General's monument has become one of their tourist attractions. On the anniversaries of the Hungarian uprising, wreaths are also placed under it by representatives of the authorities of the Republic of Hungary. On the occasion of the 150th anniversary of the 1998 Spring of Nations, a special Hungarian delegation led by the then President of the Republic, Árpád Göncz, arrived at the monument to General Bem.

The monument is an important place of remembrance of the person of the heroic general, who played an important role in the history of Poland and Hungary. At the same time, because of the rich biography of General Bem, the monument commemorates such significant events as the November Rising (1830) and the Spring of Nations (1848). It also recalls the close relations between the Polish and Hungarian nations in the past. The best proof of this is that it was ultimately inspired by the 1956 Hungarian Rising. Nowadays, on the occasion of important anniversaries, wreaths are laid under it by representatives of Polish and Hungarian government and local government. It has also become an attraction described by tourist guides. 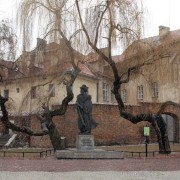 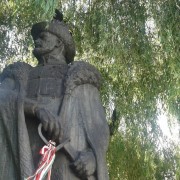