Monument to Boleslaw III the Wrymouth

The Bolesław III Wrymouth Monument is located on Sieciecha Hill on the Vistula River, about 50 m high, on Książęcy Square on Piekarska Street. Not far from the oldest parish church in Płock, St. Bartholomew. A few hundred metres away from the palace where the Wrymouthed lived and the Cathedral of the Assumption of the Blessed Virgin Mary, where his ashes and those of his father, Władysław I Herman, are probably buried.

The monument is about 5 m high and weighs over 21 tons. It is made of fine sandstone linen, imported from Spain. On the five-part pedestal, at the highest, in the very centre of it you can see Boleslaw the Wrymouth in armour, sitting on a horse. In his right hand he holds a sword, and his left hand pulls the funnels, directing his horse towards the northwest. The prince is portrayed in the company of five pedestrians in full armour. They are on the sides, slightly lower. One of them is holding the banner. They look like they're going into battle. Their faces are facing the Vistula. From the back, on the side of Piekarska Street, the monument resembles the ruins of an old castle.

The initiator of the monument's construction was a community activist from Płock, tourism promoter Marian Wilk. The civic committee established by him created a preliminary project of the monument and collected signatures of Płock residents supporting this initiative. The commemoration of Bolesław Krzywousty was then of interest to the Town Hall. The then president of Płock, Mirosław Milewski, chose the Toruń sculptor Zbigniew Mikielewicz as its author. The co-author was the artist's wife Małgorzata Mikielewicza, also a sculptor. Work on the monument took about a year. The pair of sculptors drew their inspiration from Jan Matejko's work resembling the glorious Polish past. Thus, the faces of Krzywousty and his companions present friends of Zbigniew Mikielewicz. Among the models was also an American poet Richard Chetwynd. The artist's aim was to reconcile the static nature of the monument with the vibrancy of Bolesław III the Wrymouthed, in which he saw Richard the Lionheart. As he declared, he wanted to create a work which could not be passed indifferently and would not get bored quickly. The Wrymouthed monument was unveiled on 28 September 2012. The ceremony was attended by the Płock Crossbow Squad, dressed in costumes referring to medieval traditions.

The monument in the intention of the initiators was to play an important role in shaping the awareness of Płock residents, building their pride in the city's past. Recalling that it was the birthplace of the Polish ruler, an outstanding leader and politician. At the same time restoring the memory of the fact that for a short time during the reign of the Wrymouthed, today somewhat forgotten, Płock was the capital of Poland. These facts may have inspired an unknown vandal, which damaged the monument in 2015. In the inscription on the pedestal he crossed out the word "Prince" and engraved the word "King", clearly wanting to raise the rank of the Wrymouthed person in this way. The monument can be found in tourist guides as an attraction worth seeing, especially because of the non-standard concept of the monument. 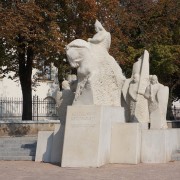 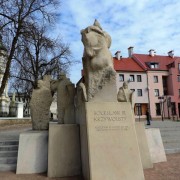