Monument of the Heroes of the Hungarian Uprising

The monument commemorates people who fought against the communist regime in the Hungarian Uprising in 1956.

It is located between the Odra river and Drobnera street. Due to relatively huge amount of trees nearby finding this object may be a bit difficult.

In memory of the heroes of 1956 Hungarian uprising - on 50th anniversary - citizens of Wrocław. November, 2006

There are several wavy stripes: (from above) red-, white- and green-colored. They symbolize a torn flag of Hungary. They are installed to the green pedestal with an inscription in three languages: (from above) Polish, Hungarian and English. The monument is made from bronze.

During the uprising, citizens of Wroclaw got strongly involved in supporting Hungarians, e.g. they provided 200 liters of blood (out of approx. 700 in entire Poland), huge amounts of clothes, food and money (more than 2 million Polish zlotys). Moreover, as an act of solidarity, a Hungarian flag with a black ribbon has been hung at the city hall. The relationship between Poland and Hungary and a will to fight together (like in the European Revolutions of 1848) have revived. The Obelisk project by Monika Molenda was implemented with the support of the Visegrad Group. It was sponsored by the local government of Wrocław, Minister of Culture and National Heritage, the Ambassador of Republic of Hungary in Poland and the Marshal of Lower Silesian Voivodeship. On November 3, 2006, on 50th anniversary of the Hungarian uprising, the monument was unveiled by the President of Wrocław Rafał Dutkiewicz and the Ambassador of Hungary in Poland Michaly Györ. During the ceremony, the Polish-Hungarian solidarity over the century was reminded

In 2011, with initiative of Hungarian Institute of Culture in Warsaw, on the wall of the student residence hall Dwudziestolatka a memorial board has appeared. Since then the local celebrations of commemorating the uprising are taking place there. Due to the better-known location of the board in the city, the monument has lost its original meaning.

Since 2011 the local and public awareness has significantly decreased. Even inhabitants of Wrocław often do not know about the monument’s existence. Nevertheless, there are some rare cases of paying tribute. This object is also one of the points of tourists from Hungary. 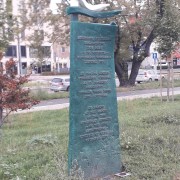 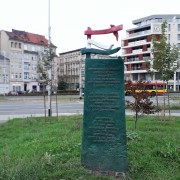