Monument to the Victims of the Ukrainian Insurgent Army

The monument is dedicated to the Poles who were murdered by the Ukrainian Insurgent Army and the Organization of Ukrainian Nationalists in 1939-1947 in the South-Eastern Frontiers. It also commemorates the Ukrainians who gave shelter to the Poles.

The monument stands on a square among the trees, near the Polish Hill.

IN THE CRYPTS OF THE MONUMENT, THERE IS LAND OF GRAVES FROM 2000 LOCALITIES OF MASS MURDERS OF POLISH PEOPLE: VOLHYNIA, TARNOPOL, LVIV, STANISŁAWÓW, LUBLIN, POLESIE AND RZESZÓW-POMERANIA IN 1939-1947.

THE MEMORIAL-MAUZOLEUM WAS DEFLECTED AND SANCTIFIED ON 25. SEPTEMBER 1999. BY HIS EMINENCE, CARDINAL CARDINAL GULBINOWICZ, METROPOLITAN OF WROCLAW.

TO THE MEMORY OF THE UKRAINIANS WHO GAVE SHELTER TO THE POLES.

The monument shows two stone blocks divided by a crack in the shape of a flaccid human body into the shape of the crucified Jesus. Both blocks have a wrinkled material structure. At the foot of the figure is the inscription "If I forget them, you God... forget me". The whole sculpture is set on a granite plinth, on the walls of which there are inscription boards. The whole monument is 4 meters high and 5 meters wide.

The construction of the mausoleum monument was initiated by Szczepan Siekierka, a member of the Association for Commemoration of Victims of Ukrainian Nationalist Crimes. In January 1996 a contest for the design of the monument was announced. Eleven proposals were submitted. Jarosław Bońkowski's design was chosen. Before the unveiling of the monument on September 25, 1999 in the church of the Blessed Virgin Mary on the Piasek in Wrocław, a mass was held for the murdered. Concelebration was presided over by Cardinal Gulbinowicz. More than 3000 people from around the world took part in the Holy Mass. Among them there were over 100 scouts and the Honorary Campaign and the Orchestra of the Polish Army. The monument was unveiled and consecrated by the Metropolitan of Wroclaw H. Gulbinowicz, accompanied by the families of the murdered.

On 11.07.2018, on the 75th anniversary of the genocide in the Borderlands, a state ceremony was held. It was attended by the inhabitants of Wrocław and the Kresowian family as well as parliamentarians, representatives of the authorities and representatives of numerous institutions.

Anniversary ceremonies commemorating the victims of genocide in the Borderlands are regularly held at the monument. They are initiated by organizations associating Borderlands residents. The monument is not located on tourist routes. 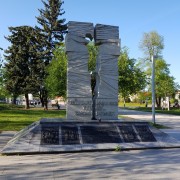 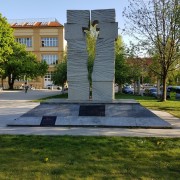