Memorial plaque in the cemetery in České Žleby

Polished granite slab with dimensions of 50 x 60 cm. The plate depicts a cross with two roses, the inscription and a photograph of Bohumil Hasil

The plaque was unveiled on the occasion of Bohumil Hasil brother Josef's 90th birthday. The initiators of the plaque placement are friends of Josef Hasil from the Confederation of the Political Prisoners in the Czech republic and some historians from the Institute for the Study of Totalitarian Regimes. The memorial was unveiled in February 2014.

The memorial plaque is dedicated to Bohumil Hasil. His brother Josef Hasil helped to flee dozens of people from communist Czechoslovakia to Bavaria. Bohumil Hasil died in an attempt to transfer his one-year-old son to Germany. Because his trip to Czechoslovakia was revealed beforehand, the Border Guard units prepared a deadly trap. Hasil was hit nine times and after his arrest and transportation to the Border Guard duty station, he died. His brother Joseph managed to return to Germany.

The plaque is placed near the wall of the cemetery where the body of Bohumil Hasil was buried by Walter Breit in unmarked place. Bohumil Hasil's brother Josef after the WWII worked as a member of the National Security Corps and served on the state border. After the Communist coup and the death of Jan Masaryk, he decided to help people to flee across the state borders into the free world. He was arrested in October 1948 and in February 1949 sentenced to nine years in prison. He escaped from the labor camp in Horní Jiřetín on May 9, 1949. He continued to serve for the CIC and continued to help people across the border until 1954 when the Iron Curtain was completed. About Josef Hasil a propaganda film called “King of Sumava” was created. Bohumil Hasil died on September 13, 1950. The plaque shows the heroism of the people who helped the victims of the Communist regime to leave to the free world. 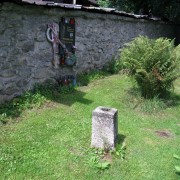 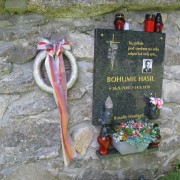