Monument to the victims of the Soviet occupation

The monument consists of a bronze plaque stylized into a tank belt. On 21 August 1968 in Liberec nine people died by the Soviets. Their names are mentioned on the plaque.

Next to the monument is a brass plate containing the following text: On Wednesday 21st August 1968, after the invasion of our country by five Warsaw Pact armies, 9 citizens of the Liberec region were shot dead near this town hall by occupying Soviet troops of the 18th 'Insterburg' Guard division. Another 45 of our citizens were injured during this shooting.

The monument is made up of a 90 cm x 40 cm plate, from which a part of a 70 cm tank belt is formed. On the monument are the names of the victims of the occupation, which are mirrored on the individual parts of the 'tank belt'. The plate is made of bronze and is fitted with a brass explanatory plate on the right side.

Miroslav Bernard himself was shot during the occupation of Liberec and initiated the creation of a monument at the town hall, which was unveiled on 21 August 1990. The author of the monument is the academic sculptor Jiří Gdovín. The memorial also melts the bronze plaque of Jánský for donating blood, which was brought by a local citizen with the words 'blood for blood'.

The 21 August 1968 occupation meant a trauma for the whole Czechoslovak society. It was in Liberec that the first day of the occupation there were nine dead and dozens of injured. The high number of victims was caused by gunfire from a single machine gun and also by the occupation tank which hit into an arcade full of people in Liberec Square. It resulted in the partial collapse of the house. On Wednesday 21 August 1968 Václav Havel stayed in Liberec who was immediately involved in anti-occupation broadcasting on local radio.

Historical memory allows new generations to come to recognize events that happened many decades ago. It was the occupation of Czechoslovakia by the five armies of the Warsaw Pact that marked a turning point for Czechoslovakia in the last century. By commemorating the victims of this occupation, the new generation will realize how inhuman and monstrous the communist system was, in which the only task of the military pact was to ambush the friendly countries. Right now, when the Communist regime is slowly rehabilitated and its supporters are operating at the highest levels of politics, it is important to remember what the Communist regime actually was, who were the people who served it, as well as the people who lost their freedom sometimes even own life. 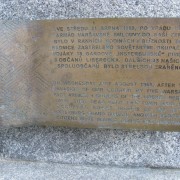 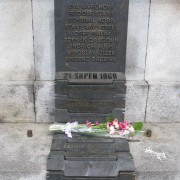 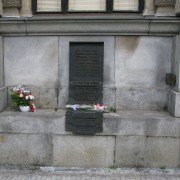