In this house 1969 – 1999 lived, foght fro the freedom and democracy Dr. Václav Benda, a disident, and a politician.

Bronze plate with dimensions of 80 x 50 cm on which the inscription is placed and in the middle of the bust of Václav Benda.

The memorial was unveiled on 17 November 2009, on the tenth anniversary of the death of a prominent dissident, Catholic activist, writer and politician Mr Václav Benda. The 17th November is the day of human rights, whose defense and promotion Václav Benda dedicated his whole life. The author of the memorial is academic sculptor Peter Oriešek. The memorial was unveiled by the Mayor of Prague 2 Ms Jana Černochová and former Minister of Foreign Affairs Mr Alexander Vondra.

The monument had originally a grammatical defect and Václav was replaced by Vacláv. The defect was later removed, but is partially noticeable. In 2004 Václav Benda was in memoriam granted honorary citizenship of the Prague 2 district. Vaclav Benda was also a co-founder of the Committee for the Defense of the Unjustly Prosecuted and for his disident activties he was imprisoned to four years by the Communist regime.

Václav Benda is one of the leading Czechoslovak dissidents. Signatory of Charter 77, he was publisher of the samizdat magazine Paraf. In 1979 and 1984, he was a spokesman for Charter 77. He was a major Catholic dissident and a consistent advocate of human rights. He was the political prisoner, sentenced to four years for his dissident activities. After November 1989 he was first Director of the Office of Documentation and Investigation of the Crimes of Communism. 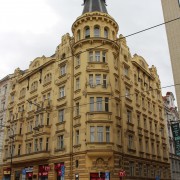 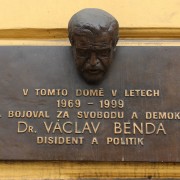