The monument is situated in the city park opposite the school where Anastas Opasek studied.

Jan Nepomuk Anastáz Opasek was born on 20 April 1913 in Vienna. In Kolín he lived from 1919 to 1932. After graduating from the Kolín Real Grammar School, he joined the Břevnov Benedictine Community. He graduated from the Order Studies from 1933 to 1938 in Prague and Rome. After ordination in 1938, he was appointed the Convent Prior of the monastery. In 1947 he was elected abbot. He was arrested by the Communists in September 1949 and next year sentenced to life imprisonment for high treason. He was granted amnesty in 1960 and then he worked in workers professions. In December 1968 he went abroad and in 1969 he graduated from the Lateran University in Rome. In 1972 he initiated the establishment of the association Opus Bonum. He was completely rehabilitated only in 1990. Then he returned to Brevnov and reestablished the Benedictine community there. In the millennium of the monastery in 1993 Holy Father John Paul II promoted the Abbey into Archabbey and Mr Opasek was promoted to Archabbot. He died on 24 August 1999 while visiting a monastery in the Bavarian Rohr. He is buried at the Břevnov Cemetery.

The monument consists of an amphibolite pedestal by Ivan Erben and a bronze bust by sculptor Stanislav Hanzlík, who at the end of his life was sitting by Anastáz Opasek model. The pedestal is 2 meters high.

The monument is dedicated to an important religious figure and a fighter against communism, Anastasius Opasek. The bust was bought by the town for CZK 180,000 and the unveiling of the monument to the centenary of Opask's birth on April 20, 2013 was attended by the Mayor of Kolín Vít Rakušan. The memorial was consecrated by Michael Josef Pojezdný, Abbot of the Strahov Monastery.

The persecution of churches is one of the greatest crimes of communist rule. Thousands of affected priests and hundreds of internees, even two executions. Anastáz Opasek was also a writer and poem. He organized an annual meeting of exiles in the Bavarian town of Frank, which has already entered history and is taught about them in history lessons. 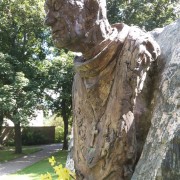 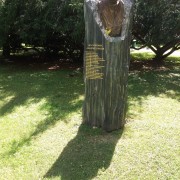 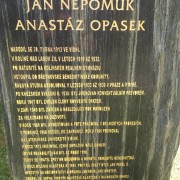