Victims of anti-Nazi occupation and winners of the 2nd resistance

The monument is situated in the park in Klarov.

The monument consists of a stylized Czechoslovak flag on a massive granite pedestal. The bronze flag is decorated with a colored patina in national colors. It is completed with a plate with an inscription. Material: bronze. Dimensions: 3 m x 1.5 m

The building of the monument was initiated by the Czech Union of Freedom Fighters (ČSBS). A contest was announced in 2003 but no winner was announced. This was followed by an invited competition, in which five artists participated. The competition was won by David Černý. After his conflict with the management of the ČSBS, among other things, due to different interpretations of the number of victims of the Nazi occupation, the second ranked academic sculptor Vladimír Preclík was chosen. He updated his design of the memorial to the US soldiers in Pilsen, where the American flag was to be the main dominant for the memorial at Klarov. The architectural design was made by architect Ivan Ruller and the design of the park concept is the work of Zdeněk Sendler. The monument was unveiled on 25 May 2006 The Mayor of the City of Prague Pavel Bém, President of the Senate of the Parliament of the Czech Republic Přemysl Sobotka, Mayor of Prague 1 Vladimír Vihan and President of the Czech Union of Freedom Fighters odboji. The event was attended by a number of prominent guests.

Immediately after its unveiling, the monument was criticized primarily from an artistic point of view.

The monument is located in an important place, next to the seat of the Czech government. On the occasion of the anniversary of the occupation in March 1939 or the end of World War II the commemoration events are taking place here. 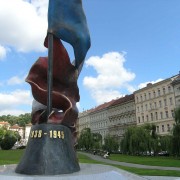 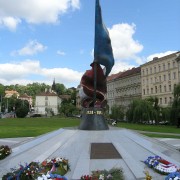 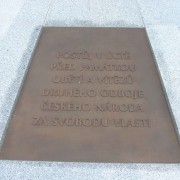