The monument is situated in Prague 7 in the house where Vladivoj Tomek lived.

Close to the Vltav river bank where the Boulevard of the heroes of Dukla ends, on one house is the plaque whoch commemorates Mr Vladivoj Tomek. Former scout altogether with his friends during their secondary school stiudies joined the anticommunist activities (f.e. they produced and diseminated leaflets, they collected weapons and planned explosions at the Czechoslovak Communist Party buildings.). In 1952 the attacked the millitary patrol near the Strašnice radio station. The patrol soldiers defended themselves (they fired on attackers 169 rounds from the machine gun). During the incident 2 soldiers were hit and later one of them died. Since 1956 Vladivoj Tomek with is friends planned another attacks on the Commnist buildings, they though also about an attack on 1 May parade, they produced explosives and guns. On 18 december 1959 Vladivoj Tomek was arrested and after several months he was charged with state treason, murder, forgery of money. He was sentenced to death and the execution took place on 17 November 1960 in 12.00 (there is an error on the plate with the wrong hour). The execution took place on very same day when Communist Parliament adopted nes state symbol – Czeh lion with the red star above the head and with flames on the breast. The memorial was created based on idea of Prague 7 town hall representative MR Ari Lieberman (DEU) and it was unveiled on Saturday, 17 Novemebr 2001 with the participation of Czech Confederation of Political Prisoners.

Every year a ommemoration event takés place on the site.

Local place of meeting of citizens, scouts from Prague 7 and veterans. 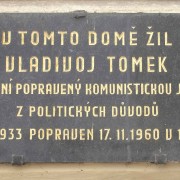 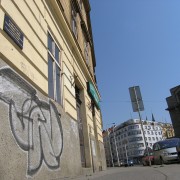 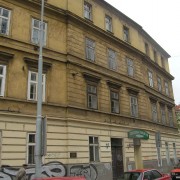