The plaque is located in the center of the Jewish district in Boskovice where Jews from Boskovice were gathered in 1942 for deportation.

In memory of 458 Jewish citizens of Boskovice, who were deported to concentration camps from this place on 14 and 15 March 1942. Boskovice Friends Club 2007.

Bronze commemorative plaque 60 x 60 cm. At the top of the raised part of the plate is located David's star under which is the symbol of barbed wire and the inscription stylized rose.

The plaque was unveiled on March 14, 2007, 65 years after the deportation of Boskovice's Jewish residents to concentration camps. The plaque was initiated by the Boskovice Friends Club. It was unveied by Eva Šmékalová from the Club of Friends of Boskovice. Mayor Jaroslav Dohnálek, ing. Fried and Jiří Bušina took the revelation.

The plaque commemorates the tragic fate of the Jews from Boskovice and is a reminder of the tragedy that affected Jewish fellow citizens during the Nazi terrorism.

Remembrance of the Shoah victims is extremely important for the future of a democratic Europe. Even today, racial prejudice and anti-Semitism are manifested in society. That is why it is so important to remember the events of World War II to the younger generation and the adults. 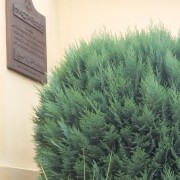 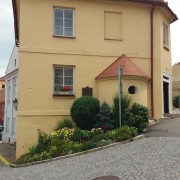 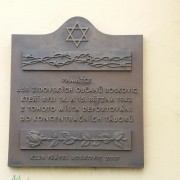