Monument to Resistance Fighter Against Communism

The plaque is located in the center of Karlovy Vary, at the place where a protest gathering against the communist regime was held, which Jindřich was the ultimate organizer.

Bronze commemorative plaque 50 x 30 cm. The plaque is placed at the main post office where the anti-regime rally was held in 1989.

The board commemorating Jindřich Konecny  was unveiled on the tenth anniversary of the beginning of the November Revolution of 17 November 1989. Jindřich died in the same year.

The plaque commemorates the poet, writer and dissident Jindřich Konečný who was sentenced to two years in prison for smuggling forbidden literature. After his early release, he re-established contacts with Pavel Tigrid and Jiří Pelikán and continued to distribute samizdat and exile books and magazines.

Jindřich Konecny ​​was one of several dozen people who were persecuted for spreading samizdat and exile literature. Exile literature was the main means against censorship in Czechoslovakia in addition to radio broadcasting and Western television. Books of banned writers and world literature were published in exile. Exile publishers and exile magazines were often the only salvation of the Communist-destroyed independent culture. 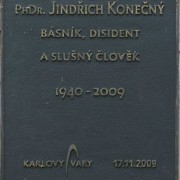 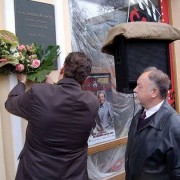 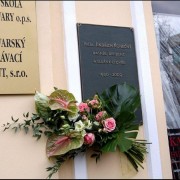