The monument is located in the park near the University of Agriculture.

Major General Ing. Rudolf Pernický *1. 7. 1915 Krhová na Valašsku † 21. 12. 2005 Praha Second Foreign Resistance Commander, Tungsten paraunit mission Commander in the Protectorate from 21 December 1944 until the end of World War II, sentenced to 20 years in prison in 1949, released in 1960, rehabilitated after 1989, President of the Confederation of Political Prisoners, 1st class Order of White Lion holder and many other awards

The stele of the monument is made of Mrákotín granite and resembles a parachute parachute canopy. The stele is seated in a granite circular pedestal. Height 2,5m.

The monument was built from a public collection. Its unveiling was on 21 December 2013 by Defense Minister Vlastimil Picek and Mayor of the City District Petr Hejl. Furthermore, representatives of the Volunteer Fire Brigade, Sokol, Confederation of Political Prisoners and others. The monument was blessed by Archbishop Dominik Duka. The author of the monument is Petr Lacina the author of a special font Vojtěch Říha.

The history of paratrooper missions from England to the Protectorate of Bohemia and Moravia is one of the most important events in the modern history of the Czech and Czechoslovak Republic. In addition to the landing Athropoid mission during which Reinhard Heydrich was assassinated there were planted into Protectorate several dozen men in other missions.

Paratrooper missions were during the WWII the most dangerous war operations with many of killed or captured soldiers. Small groups which came from Englasnd had mostly sabotague and intelligence tasks. They operated radio`s and reported their activity back to London. After the WWII the Communicts tried to marginalize their activities. Many of those heroes were during 50`s persecuted and Jaroslav Nechanský was executed. 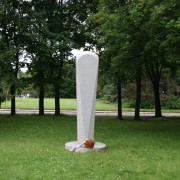 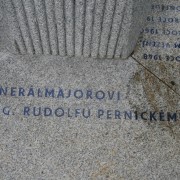 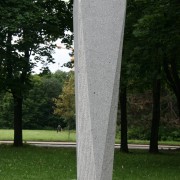