A monument on the site of a tragic event

The memorial commemorates the tragic event that occurred on 7 September 1968. Drunk soldier of the Polish occupation army Stefan Dorna shot two citizens of Jičín in a drunken state and another five injured five members of the Polish army. He was sentenced to death, later changed to life imprisonment and released after 15 years of sentence.

The monument is in the place where the tragic event occurred.

The following text is on the monument:

A memorial to the victims of the intervention of Jaroslav Veselý and Zdena Klimešová who were shot in this place on 7 September 1968 by a member of the Polish occupation army.

The monument consists of a plate of black polished granite from which two gray granite columns grow. The board has dimensions of 1 x 1 meter. The left granite column is 70 cm high and the right one is about 5 cm smaller.

The memorial was unveiled on the initiative of the Town of Jičín on the occasion of the 45th anniversary of the occupation of Czechoslovakia by the Warsaw Pact armies on 21 August 2013 and replaced the original makeshift memorial. The author of the monument is the architect Mr Pavel Jiránek.

It is a place of local memory that is important for the whole country. It recalls the tragic events of 1968 and the subsequent months when dozens of Czechoslovak citizens were killed by the occupying armies. It was a completely absurd act. The funeral of both victims became a great demonstration against the occupying troops and expressed the opposition of the citizens to the occupation armies in Czechoslovakia. 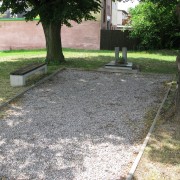 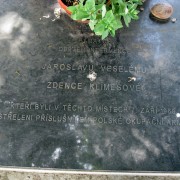 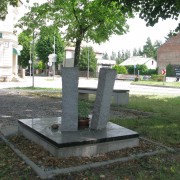