Josef Toufar, was arrested in 1949 after the so-called Cihošť miracle. During Sunday Mass in Číhošť in Moravia, the cross on the altar was tilted over two Sundays, according to extant testimonies. Though Toufar himself tried to disseminate the matter, she shouted around and followed a hard hit by the State Security. Father Josef Toufar was arrested and taken to Valdice Prison, where he was tortured by the State Security Investigator Ladislav Macha. With a sharp blow to the stomach, he tore his spleen. In the aftermath of this injury, Father Toufar died in a few days.

The plaque is at the entrance gate of the prison where the Roman Catholic priest Josef Toufar was tortured.

The following is on the monument:

Do not be afraid, I have overcome the world" (John, 16, 33) To commemoration of Mr. Josef Toufar, the martyr and to all who have fallen victims to the Communist despotism in Valdice prison. With respect and gratitude, those who do not forget.

The board is made of 35 x 50 cm pink sandstone with black lettering.

The plaque was unveiled on 19 September 2018 on the initiative of an employee of the Valdice Prison Mr Pavel Kuřátko and the prison chaplain Mr Pavel Zvolánek. The chairman of the Ecumenical Council of Churches Mr Daniel Ženatý and Bishop of Hradec Králové Mr Josef Kajnek, as well as senators, representatives of the town of Jičín and the prison service, attended the revelation.

Since 1939, many political prisoners have been imprisoned in the walls of the Valdice Prison as they resemble two more boards located right next to the prison entrance. The last political prisoners were released from prison in Valdice in December 1989. The prison area was a former monastery that served as a prison since 1856. It was one of the heaviest and most closely guarded prisons during communist Czechoslovakia. 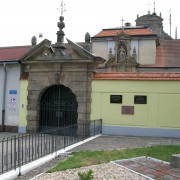 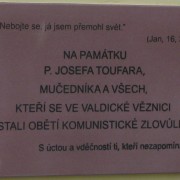 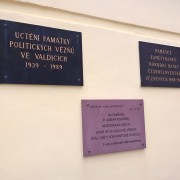