Memorial to the victims of communism and political prisoners

Political prisoners and their tormentors

The monument is at the entrance gate of the prison, in which many innocent victims of the communist regime were imprisoned.

Memorial to the Victims of Communism and Political Prisoners / 2009 / Jiří Sozanský / Technical Cooperation HVH Foundry and Kovovýroba Hrubý. To commemorate political prisoners and victims of the communist regime. The Prison Service of the Czech Republic 2009

The monument is made of bronze, copper and stainless steel. It consists of a stylized star with a statue of a dog attacking a tied figure symbolizing political prisoners. The monument is three meters high

Thirty years after the collapse of the communist regime, there is often a relativization of violence and injustice that occurred throughout the Communist Party's rule in Czechoslovakia. The monument is a reminder of the atrocities that unjustly imprisoned citizens were subjected to under the totalitarian regime. 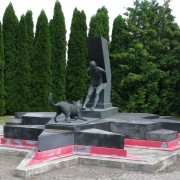 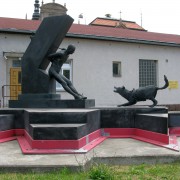 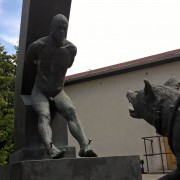