US Army Memorial in Cheb

US Army for the liberation of Cheb.

The memorial is located in the city center.

The memorial is dedicated to the US soldiers by Mr Aleš Kucera and his family with the help of the city of Cheb, the Union of Friends of the USA and other unnamed people, who were not indifferent to the concealment of the truth in times of non-freedom. March 1990

It consists from two granite panels and one block. The first granite part has dimensions 200 x 100 cm. Second part is 200 x 60 cm. The block is 50 x 30 x 30 cm. On the panels are the names of the soldiers and the emblem of the relevant military unit.

The monument was originally unveiled on April 27, 1946, on the anniversary of the liberation of Cheb by the US Army. In 1951 it was removed and a limited, slightly modified copy was unveiled after the fall of Communism on April 27, 1990. 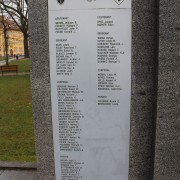 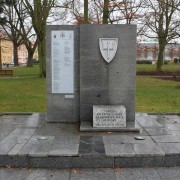