Franz Kafka. Author of the statue Jaroslav Róna cast by Miloš Vacek The monument was built by Franz Kafka Society in 2000 - 2003 with the financial support of TV Nova, Prague 1 and City of Prague

The bronze statue depicts two figures, while the larger one has no hands or a head and the figure of Franz Kafka sits on it. Height 3.75 meters

The initiator is the Franz Kafka Society with the contribution of TV Nova City Hall Prague 1 and the City of Prague.

Franz Kafka is an important German writing writer born in Prague on July 3, 1883. His Jewish name is Amšel. During the communist era, his books were not to be published except for the brief period of the 1960s. His most famous novel, Proce, considered communist censorship as a description of the totalitarian system.

Kafka was a convinced Zionist and dreamed of living in the land of Israel. He strongly supported political prisoners. He loved Prague. His books were translated into Czech by Milena Jesenská. Belongs to the most important authors of the 20th century. The work of Franz Kafka belongs to classical literature describing the struggle of man against political power and his inability to stand up to this struggle. 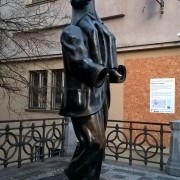 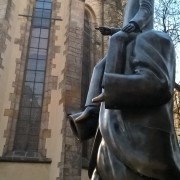 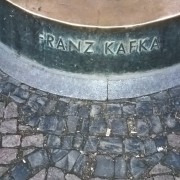