The plaque is located on the building of the Regional Administration Office in Hradec Králové.

The plaque contains only an inscription with brief information about the last deceased political prisoner in Communist Czechoslovakia, Pavel Wonka. It is made of bronze, size approx. 30 x 70 cm.

The commemorative plaque was unveiled on November 14, 2003. The initiator was the Deputy Governor of the Hradec Králové Region and politician KDU-ČSL Vladimír Derner. The author of the plate is sculptor Jiří Škopek. Pavel Wonka's brother, Jiří Wonka, was present at the unveiling, who together with him announced his candidacy for the then Federal Assembly in 1986 and was subsequently convicted. Jiří Wonka after 1989 contributed to the rehabilitation of his brother.

At the memorial plaque, commemorative events of Pavel Wonka are held on the anniversary of his death on April 26, 1988 in the Hradec Králové detention center. His death and funeral had a great response in Czechoslovakia and abroad.

On April 26, 2018, there was a seminar on Pavel Wonka and the history of the prison system in the period of so-called normalization. 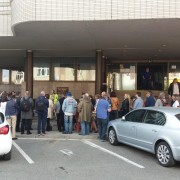 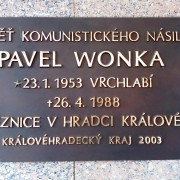 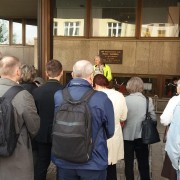