Memorial to RAF and legionnaires.

A memorial to RAF pilots and legionnaires pilots 1914-1918

Monument at the entrance to the Central Cemetery in Jihlava.

Monument at the entrance to the Central Cemetery in Jihlava. Monument to RAF pilots. Four prisms holding a tin silhouette of an airplane with the inscription. On the ground is a small monument with the national symbol of Czechoslovakia two-tailed lion. In front of this sculpture, a monument to pilots of legionnaires is created on the ground from three semi-round plates of artificial stone. The font and plate are cast bronze.

The author of the memorial is a Jihlava citizen and history enthusiast Martin Herzán, who installed both memorials on the site of a double grave, which he bought at his expense.

The monument is installed in the cemetery as a reminder of the pilots who gave their lives in both world wars for freedom of Czechoslovakia. The history of WWI legionnaires is practically unknown to the public.

Fight of Czechoslovak airmen in the RAF during World War II is one of the greatest heroic acts of the Czechoslovak army. After the war, the Communist regime rewarded them with bullying and imprisonment. The fight of legionnaires in the First World War is virtually unknown chapter of Czechoslovak history. 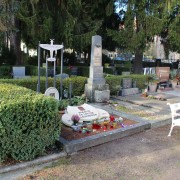 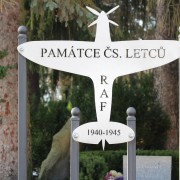 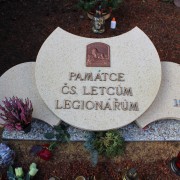