The memorial is located on Alšovo Square next to Jan Palach Square, where the administration of the Faculty of Arts of the Charles University is located. Jan Palach studied at this faculty since autumn 1968.

The Funeral of Jan Palach

When I entered the first meditation

I escaped the gravity of the object,

I experienced the emptiness,

And I have been dead a long time.

When I had a voice you could call a voice,

My mother wept to me:

My son, my beloved son,

I never thought this possible

Halfway in mud and slush the microphones picked up.

It was raining on the houses;

It was snowing on the police-cars.

The astronauts were weeping,

Going neither up nor out.

And my own mother was brave enough she looked

And it was alright I was dead.

There are two objects made of stainless steel and cortene. Their basic dimensions are 2.8 x 2.8 x 7.3 meters. From the roof of the prisms, 7 x 7 (in total 49) pyramidal spikes protrude, which are fan-branched at the House of Suicide; at the House of the Mother Suicide stands vertically and the upper base is made of glass plates through which light comes into the interior. The total height is 7.3 meters.

The work was created on the basis of a design by the American architect John Hejduk, who in 1991 donated it to the city of Prague and the Czechoslovak people. The original inspiration was Cézanne's 1873 House of the Hanged Man in Auvers (La maison du pendu, Auvers-sur-Oise), on a throne above an abandoned house to the sky with dry tree branches. Another inspiration was the poem by David Shapiro Jan Palach's Funeral, a standing poet written in response to Jan Palach's self-immolation and his funeral in January 1969. The works created according Heyduk's designs have appeared in many world cities in Europe (Berlin, Milan, London and Oslo), as well as across the ocean in Atlanta, Boston, Philadelphia, Buenos Aires. However, the Jan Palach Monument in Prague is the first permanent sculpture by John Hejduk in the public space in the world. In the Czech environment the monumental works were dedicated to Jan Palach and his mother (the original name is the House of Suicide and the House of Mother Suicide) and presented in the wooden form in 1991 in the Prague Castle during Hejduk first exhibition in Czechoslovakia. The first sculptures were created by the students from the Georgia Institute of Technology in Atlanta under the superviosion of Prof James Williamson in 1986–1990. Due to weather conditions, wooden prototypes degraded very soon and after 2000 had to be removed. On 18 January 2012, the Culture Committee of the City of Prague approved the construction plan of the Jan Palach Memorial and a memorial plaque with David Shapiro's poem on Alšovo nábřeží in Prague 1 next to the buildings of the Academy of Arts, Architecture and Design. In October 2015, the Prague 1 City District completed the revitalization of the park according to a project by the MCA architectural studio. The memorial was unveiled on 16 January 2016 with the participation of the daughter of John Hejduk, the poet David Shapiro, the revitalization authority of the MCA studio and a number of witnesses.

The memorial is one of the places where his memory is commemorated at the anniversary of historical events connected with Jan Palach.

Jan Palach Memorial is marked in all important electronic maps. It is one of the most important places of memory commemorating the memory of Jan Palach. 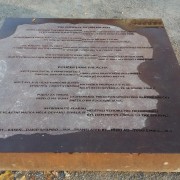 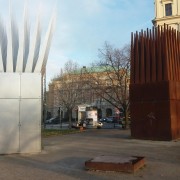 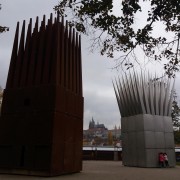