The sculpture is near the Isreal embassy.

Those who bear memories of all time. One column is made of solid material, the other contains a poem in Hebrew and on the third one, the borders of Czechoslovakia before the Second World War are carved.

The memorial was unveiled in 1996 and is the work of Israeli sculptor Israel Hadana, who donated it to the Prague City Gallery. It was originally part of the Israeli print exhibition in 1995.

The sculpture commemorates the victims of the Holocaust during World War II who lived in the territory of the Protectorate of Bohemia and Moravia. During the Nazi impoverishment, about 120,000 Czechoslovak citizens perished in gas chambers or concentration camps.

To commemorate the attempt to exterminate Jews during World War II is important today, especially at a time of rising anti-Semitism. The monument is located near the Israeli embassy and other major works of art. 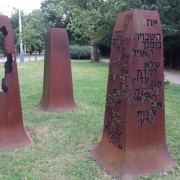 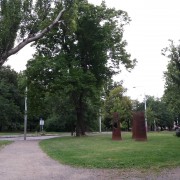