Monument to the Fallen Soldiers

The memorial is dedicated to all fallen soldiers in World War II.

The memorial is located in front of the General Staff of the Czech Army.

The memorial was unveiled on November 11, 2001 on the day of war veterans' memorials. The authors are the academic sculptor Jiří Plieštik, ing. Tomáš Novotný and Jiří Opočenský. Defense Minister Karel Kühnl and Deputy Chief of Staff Rostislav Mazurek attended the unveiling.

The monument forms the dominant of the Victory Square. At the anniversary of the end of the Second World War and the celebration of the Day of War Veterans, there are official ceremonies. At the time of totalitarianism, the soldiers fighting in the western armies did not mention official propaganda. The memorial is a place of remembrance for all Czechoslovak soldiers killed during World War II.

During World War II, Czechoslovak soldiers fought on many battlefields in Europe and Africa and the Middle East. Only after the fall of the communist regime was it possible to commemorate the memory of those who did not fight only on the Eastern Front. The monument is an important place and dominates the entire Victory Square. 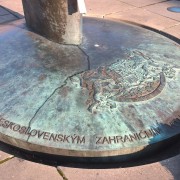 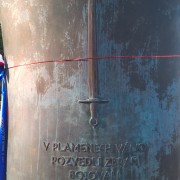 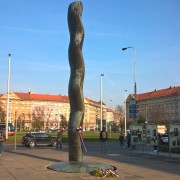