Monument to the rescued Jewish children

The memorial is located at the station, from which trains with mostly Jewish children departed for England on the eve of the 2nd St. war.

This Farewel Memorial is a symbol of courage and love of parents who in 1938 and 1938 regardless of what their own fate awaited them, boarded their children on trains and with heartache and tears in their eyes waved good bye, sending them away to safety to save their lives. Most parents perished in the Holocaust Winton children. Realization of public collection in the Czech Republic by Ms Zuzana Marešová. Public donations in the UK organized by Lady Grenfell-Baines MBE

The monument represents a marble plaque with an inscription and a bronze door representing the entrance door in the wagon through which children were leaving the glass, the hands of the children are imprinted on one side and the hands of their parents on the other. The marble slab has dimensions of 70 x 80 x 10 cm and doors 80 x 180 cm.

The memorial was unveiled on May 27, 2017 by the author of the idea is Hugo Maroma, who is one of the rescued children. The creation was initiated by Zuzana Marešová and Milena Grenfell-Baines née Fleischmannová. The design of the monument was made by Stuart Mason, the glass decoration was made by Jan Huňát.

At a time of growing anti-Semitism in Europe, it is important to remind the Shoah victims and the courage with which some people helped Jews save their lives. Sir Nicholas Winton worked in Prague and organized the rescue of mostly Jewish children from the onset of Nazism. He managed to save at least 669 children. 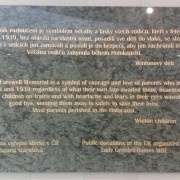 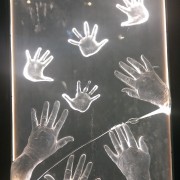 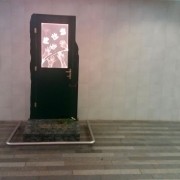