Monument to Marshal of the USSR Ivan Stepanovich Konev

The monument is situated in the Interbrigade Park. This is a large monument that was supplemented by explanatory boards in 2018.

Ivan Stepanovich Konev 1897 - 1973. Marshal Ivan Stepanovich Konev commanded the 1st Ukrainian Front, whose units were deployed to the final attack on Berlin and liberated northern, central and eastern Bohemia and the first to enter May 9, 1945 in Prague. In the fall of 1956, he directed the suppression of the Hungarian uprising by the Soviet Army, and as commander of a group of Soviet troops in Berlin in 1961, he contributed to the so-called Second Berlin Crisis by building the Berlin Wall. In 1968, he personally backed the intelligence reconnaissance before the Warsaw Pact troops invaded Czechoslovakia. The monument was built in 1980 by the city district of Prague 6 ● 2018

Extensive monument located in the park. On a four-meter-high pedestal, a statue of bronze is equally tall. The bottom of the monument and pedestal are made of blue granite. There are three boards on the monument with explanatory inscription in Czech, Russian and in English.

The memorial dedicated to USSR Marshal Ivan Stepanovich Konev was unveiled on May 9, 1980, on the day of the thirty-fifth anniversary of the arrival of the Red Army in Prague in May 1945. It was authored by academic sculptors Vratislav Růžička and Zdeněk Krybus.

The memorial was unveiled in May 1980 as a thanks to the Red Army for the liberation of Prague. The statue holds a bouquet of lilacs in hand, which the Red Army was welcomed in Prague. In fact, Prague was already liberated and only about ten members of the Red Army fell when the army arrived in the capital of Czechoslovakia. Prague was saved from destruction by General Vlasov and his soldiers who were later almost all shot dead.

The monument is an interesting proof of the complexity of the history of the twentieth century. Although Marshal Konev commanded the First Ukrainian Front, which arrived on 9 May 1945 to the Germans already abandoned Prague and was welcomed as a liberator, but also participated in the suppression of anti-communist uprising in Hungary, which the Soviet Union drowned in blood. Later, as a commander of troops stationed in the GDR, he participated in the construction of the Berlin Wall and subsequently in the reconnaissance activities in Czechoslovakia before his occupation of the Warsaw Pact troops in August 1968. It is thus a historically controversial figure. The monument has already become a target of various attacks, mostly commemorating the activities of Marshal Konev leading to the strengthening of communist power in Eastern Europe. 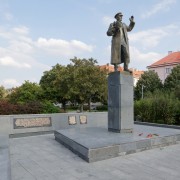 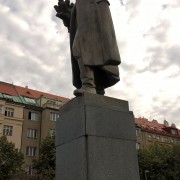 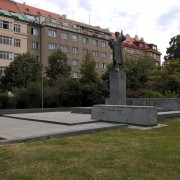 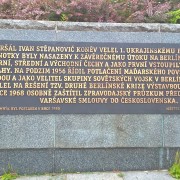