At the top of Wenceslas Square, near the fountain in front of the historic building of the National Museum

The Memorial is in the horizontal level, situated directly on pavement. It consists of two stone rounded mounds in which a metal cross is placed, symbolizing a lying figure. In the upper part of the cross it indicates the burden wooden cross. Material: pavement cubes and bronze. Dimensions: 2,5m x 1m.

The memorial is situated on the spot where Jan Palach immolated himself on 16 January 1969 to provoke the public reaction against the Soviet occupation and so called normalization. The memorial was done through public tender competition and as the authors were chosen the artist Ms Barbora Veselá and architects Čestmír Houska and Jiří Veselý. In their design they stressed the horizontal principle in comparison to other memorials. The memorial is symbolising both a human figure and a torch. The cross is situated in the direction where Jan Palach fell on the ground. On the left side of the cross arm the inscription with names Jan Palach and Jan Zajic with their birth dates and death is visible. The authors chose the cross as a symbol of sacrifice. The memorial was officially unveiled on 16 January 2000 (it was the 31st anniversary of self-immolation of Jan Palach) by the Mayor of Prague 1 District Mr Jan Bürgermester, with the representatives of the Jan Palach Society from Všetaty and Society Thimm which co-financed the memorial.

Near the memorial annual commemoration event takes place on 16 January and 20 January (death of Jan Palach), respectively on 25 February (the day of self-immolation and death of Jan Zajíc). On 50th anniversary a memorial service took place here as well.

It is one of the most important memorials devoted to significant personality and events of 20th century history. The memorial is highly evaluated for its concept. At the same time it shows a successful counterpart to the spontaneously created memorial to Jan Palach and Jan Zajíc near the St. Wenceslas statute, which was erected during the revolution in 1989.  There are some other memorials devoted to Jan Palach in Prague. Another very famous one is situated on the building of Charles University the Faculty of the Arts on Palach square, where Jan Palach was a student. The author of this memorial is Mr Olbram Zoubek who used in his design a death mask of Jan Palach. The other extraordinary memorial is the House of Mother and the House of Son, erected in Alšovo river bank, based on the design of the American architect of the Czech origin Mr John Heyduk. In 2019 in Všetaty city a new Memorial of Jan Palach with the museum will be opened. 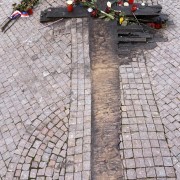 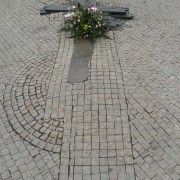 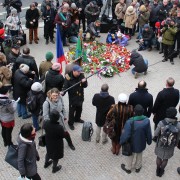