The memorial (plaque) is situated in the upper part of Masaryk square in city of Jihlava next to the Marian (Plague) Column.

EVŽEN PLOCEK / He self-immolated in a protest against normalisation policy of the Communist Party of Czechoslovakia 4 April 1969, the Victim for the Freedom.

The memorial stands on the small marble base. It is black marble plate on which the inscription is engraved. Material: artificial black marble. Dimensions: 1 m x 0,5 m.

In its design it is very simple memorial, which commemorates a gravestone. It is dedicated to Evžen Plock, who on 4 April 1969 (Good Friday) in a passage in Jihlava Peace square (today Masaryk square) he poured on himself with 2 bottles of a thinner and lit himself. Mr Evžen Plocek (1929–1969) was thirty-nine year old member of the District Comittee of the Communist Party and the managing position worker of Mootorpal national company. He was the follower of democratisation movement in the Party. He was a father of 15-years old son. He died in a hospital on 9 April 1969. His act was a result of a despair from the policitcal situation after August 1968 occupation in Czechoslovakia. Altogether with Ján Zajíc he is considered one of the famous followers of Ján Palach. In November 2009 the Ministry of Defence awarded him in memoriam with the Golden Linden medal. In October 2013 he was awarded by Czech NGO Masaryk Democratic Academy with the Golden Medal of T. G. Masaryk in memoriam. In April 2017 Mr Plocek was awarded by the city of Jihlava a honorary citizen.

The memorial is situated on symbolic place, where Mr Plocek did the self-immolation on 4 April 1969. The memorial was officially unveiled at the ceremony of the 21 anniversary of his act. It is regurarly reconstructed.

The memorial is situated on public space and can be seen as the symbolic remark on one drastic protest. Annual ceremony and commemoration event is taking place there with the participation of city representatives and citizens. 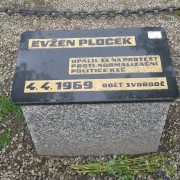 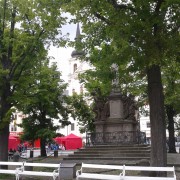 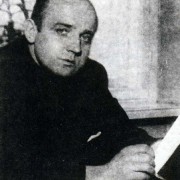