In this house Zdeněk Palme was born on 15 August 1914, died 10 Apri 1945,  F/Sgt RAF bobmer; Czechoslovak War Cross 1939 holder; dude without any fear. Unsatisfied with the German occcupation of his native land he fought against the Nazism as a fighter pilot and bomber pilot on the sky above the Europe and Atlantic ocean.He died on 10 April 1945 when he crashed with his plane die to the techncal problems into the rocks of the Hoy island in Orkney in Scotland.

The square plaque with its dimensions 58 x 58 cm from the solid material imitating bronze with the Badge of № 311 Squadron RAF.

The memorial was unveiled on 26 Sept 2015 by the citizens of village Poniklá from initiative of its mayor, Tomáš Hájek.

The plaque commemorates a hundred of stories of foreign pilots and crew members of air force during the WW II, who died during fulfilling their duties. He is an important citizen of small village, where also the elementary school is operating and local Tuláček celebrations are taking place annually  during which a famous personalities of the village are commemorated.

It is a regional, local memory site which also overleaps the region. It commemorate the bravery of its citizens who decided to fight against the Nazi occupation abroad and many of them laid down one's life for it. 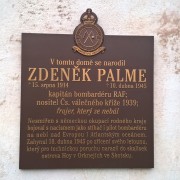 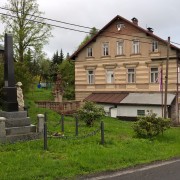 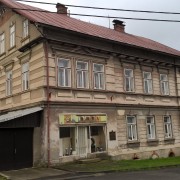