The monument commemorated those who died in the service and defence of the People's Republic of Poland (activists associated with communist organizations after World War II, such as PPR/PZPR, ZWM, ORMO, SB, UB, MO).

The monument stood on Iron Gate Square, in front of the Lubomirski Palace.

Fallen in the Service and Defense of People's Republic of Poland

The monument consisted of 483 elements cast in bronze, depicting a group of soldiers, members of PPR, ZWM, militiamen, members of ORMO, workers, peasants and representatives of the intelligentsia lifting up the eagle. The monument was supplemented by stone elements of the composition. The dimensions were 16 m. high, 20 m. wide.

The idea of erecting the monument was initiated at the 9th Extraordinary Congress of the Polish United Workers' Party (PZPR), the monument was unveiled on the eve of the anniversary of the announcement of the PKWN manifesto on 20 July 1985 by Bohdan Chmielewski.

In 1991 the monument was dismantled, parts of it were placed on the premises of the Municipal Road Administration in Warsaw (Żerań). Fragments of the monument are displayed in the Monument Park of the Foundation of the Bygone Age in Ruda Śląska. Currently, in place of the monument is the Tadeusz Kościuszko monument. 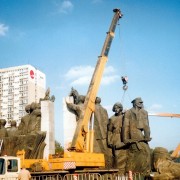 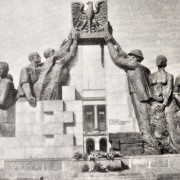