The monument commemorates General Władysław Anders (1892-1970). During World War II he commanded the Polish Armed Forces in the USSR.

The monument stands on the square at Wolności Square

The monument, the bust on the plinth is about 2.5 meters high. The bust is made of brass, a granite pedestal into which elements are woven to symbolize the red poppies of Monte Cassino. The author of the monument is sculptor Robert Sobociński. Above the inscription on the pedestal is the Polish Army Eagle. Below the inscription a commemorative badge of the second body in the form of a shield. In the upper part there is a Warsaw mermaid, and on the sides there are laurel twigs. On the frame of the lower part of the shields there is an inscription '2 Corpus Polski', in the middle a cross.

The place of the monument is connected with the birthplace of Gen. W. Anders, who was born in Błonie, today's Krośniewice district. The unveiling of the monument was done by General Anders' daughter, Anna Maria Anders.  The ceremony was attended by representatives of the veterans' unions, among others, the representative of the President of the Republic of Poland Waldemar Strzałkowski, the Head of the Office for Veterans and Repressed People Jan Stanisław Ciechanowski, the Secretary of the Regional Operational Programme of the Polish Armed Forces and the Ministry of National Defence Andrzej Krzysztof Kunert, as well as local government officials, students from local educational institutions, representatives of historical and military circles. A letter from the Speaker of the Polish Parliament Ewa Kopacz was read out.

The monument plays primarily a local role. It is an important element building the identity of Krośniewice residents. 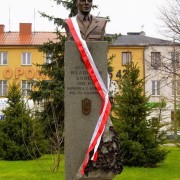 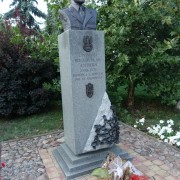