The monument and mound were erected to honour General Kazimierz Pulaski (1745-1779), on the 150th anniversary of his death, a hero of two nations fighting for independence: Poland and the United States of America, one of the leaders of the Bar Confederation.

The monument and mound are located in Kazimierz Pulaski Park, by the road leading from the center of Krynica-Zdroj to Tylicz, just behind the bend of the road to Tylicz.

To Kazimierz Pułaski, the Compatriots

The monument is situated on a mound, 7.2 m high, has the shape of a prism made of sandstone, topped with a bronze cast figure of an eagle rising to flight. The height of the monument is about 7 m. On the front wall of the monument there is a medallion with Kazimierz Pułaski's bust, and an inscription is engraved below.

The idea to commemorate Kazimierz Pułaski was given by Franciszek Kmietowicz, founder of the Monument Construction Committee. In 1897, he took the initiative to commemorate the General. Inspired by him, the town's inhabitants had been collecting money since 1897 and bought the land at the foot of Huzar Wierch from 30 Lemko landowners. They decided to build a mound there and crown it with a monument to Kazimierz Pułaski. Between 1897 and 1901 the mound was built. At the turn of 1926/1927 the obelisk of the monument was made by the company of the Trembecki brothers from Cracow. A cast of the eagle, designed by Stanisław Wójcik from the State School of Decorative Arts in Cracow, was made in 1929. The ceremonial unveiling and consecration of the monument took place on 25 August 1929, after the speech of Franciszek Jan Kmietowicz. In March 1939 the members of the Committee transferred to the Polish state the ownership of the Pulaski Park together with the monument and the surrounding buildings.

During World War II the monument was destroyed. The Germans smashed the eagle. A plaque with an image of Pułaski and an inscription saved the local people from destruction and hid them. In 1969, mainly thanks to the efforts of the Polish Philatelic Association Circle in Krynica, the monument was rebuilt.  On May 4, 1969, the 190-year anniversary of General Pulaski's death, his monument erected on a mound was unveiled again. In the 1990s, the city of Krynica presented the area with the mound of the Krakow Agricultural Academy, which was to be the guarantor of the monument's care. However, the university sold the land with the mound to an entrepreneur from Warsaw. He built a villa and fenced the area. Since 1998 the monument has been located on private property, it can only be seen from behind a high fence. In 2017 the area where the mound with the monument is located was sold again. 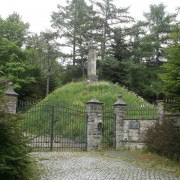