The monument commemorates the January Uprising insurgents Rev. Stanisław Brzóska and Franciszek Wilczyński. Rev. Brzóska was at the head of the insurgent unit (consisting mainly of peasants) which fought the longest in the uprising. He was hiding with his adjutant F. Wilczyński in the district, first in Paczuski, then in the village of Krasnodęby-Sypytki, on 29 April 1865 they were captured by the Tsar' army. On 23 May 1865 they were publicly executed on the Sokołów market.

Sokołów Podlaski, Rev. Stanisława Brzóski Square. The monument is located in the city centre at the intersection of Długa and Wilczyñskiego Streets in the place of the former market square, in the place of execution of the last January insurgents.

The plaque from 1954: "Eternal glory to the heroic fighters of the 1863 uprising, Father Stanislaw Brzozka and blacksmith Franciszek Wilczyński executed in this place by the Tsarist troops on 23 May 1865. It was built on the 90th anniversary of the January Uprising and on the 10th anniversary of the creation of the Polish People's Army".

The plaque from 1985: "On the one hundred and twentieth anniversary of the death of the heroes of the January Uprising, General Stanisław Brzóski and Franciszek Wilczyński, the monument destroyed by the Nazis restored the Podlasie region to its former glory. May 1985".

The plaque 2010: "A memento of the posthumous decoration of Rev. Stanislaw Brzoski with the Order of the White Eagle by President of the Republic of Poland Lech Kaczynski on 29 May 2009. On the second anniversary of his stay in Sokolow Podlaski, President Lech Kaczynski's grateful Sokolovians".

The monument, about 10 m. high, made of granite and bronze. Conical pedestal set on a wide three-stage base. On the pedestal bronze ornaments. On the steps of the pedestal there is a wreath measuring 250x160 cm, among the laurel leaves of the wreath there are insignia symbolizing pastoral work and smithery. On the pedestal, at half height, the image of an eagle. An inscription is engraved between the brown ornaments.

In 1919, Bishop Henryk Przeździecki, the Ordinary of Podlasie, during his visit to Sokołów parish, took the initiative to build a monument for martyrs.  In 1922, the local Sokołów City Council was asked by the local Scouts' Senior Circle to designate a square at the site of the execution of the monument. The Municipal Council accepted the idea and established the Monument Construction Committee. The project was carried out by the sculptor Aleksander Veith. In 1924 the construction work began. Mighty stone boulders of bronze and granite for the obelisk were purchased from farmers in the villages of Toczyski (for the conical part of the monument) and Jablonna (for the column base). The ceremonial unveiling took place on 23.05.1925. Bishop H. Przeździecki celebrated Mass. The ceremonies were attended by the honorary company of the Polish Army, as well as 12 participants of the January Uprising, including comrades of Brzóska

In 1940, the Germans stripped the monument of its most precious elements made of bronze: the eagle and the wreath. They took them from Sokołów Podlaski and melted them into ammunition and weapons. In the years 1953-1954 a new bronze plaque was founded, its content referred to the 90th anniversary of the January Uprising and the 10th anniversary of the People's Army of Poland. In the 1980s an initiative was taken to restore the monument to its former glory. A Committee for the Revalorization of the Monument of Father Stanislaw Brzoski was established. Roman Przesmycki became the chairman. On 23-28.05.1983, a session of 'Sokołów during the January Uprising' was organized, which appealed for funds to revalorize the monument. In autumn 1983, a plaster cast of the eagle sculpture, made by sculptor Ryszard Kozłowski from Warsaw, was ready. The casting was made by the Artistic Industry Cooperative Bronze Decorative in Warsaw. In mid-May 1984, the eagle was attached to the monument, and on 23 May 1984, a laurel wreath was unveiled and a commemorative plaque was added a year later. 29.05.2008 The President of the Republic of Poland Lech Kaczyński came to Sokołów to posthumously award Rev. Stanisław Brzóska with the Order of the White Eagle. To commemorate this event on 29.05.2010, at the initiative of the city authorities, a plaque was added at the foot of the monument. Currently, the plaque is located in the vicinity of the 1953/54 plaque and the 1985 plaque informing about the reconstruction of the monument.

The monument plays primarily a local role. It is an important element building the identity of the inhabitants of Sokołów Podlaski. On the anniversaries of the Uprising and the execution of the insurgents, local ceremonies are organized.  Situated in the city centre, the monument is a frequent meeting place for residents, present in city guides. 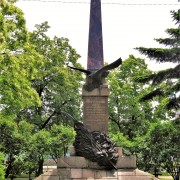