Monument to the Legion's Deed

The monument commemorates the entry of the First Cadre Company into Kielce on 12 August 1914 and the fights of the Polish Legions between 1914 and 1918.

The monument stands on the square at Piotra Ściegiennego Street (formerly Al. 3 Maja) near the Provincial House of Culture.

The inscription on the pedestal: 'To Legions - Nation'. Inscription on the board (southern wall of the plinth): 'Monument of the Legion's Deed commemorating the fights of the Polish soldier in the years 1914-1920, initiated by the entry of J. Piłsudski's Riflemen into Kielce on 12 August 1914. The monument chiseled by Prof. Jan Raszka unveiled on 2 October 1938 was destroyed in September 1939 /sculpture/ and in 1950 / pedestal. The sculpture was reconstructed by the sculptor Stefan Maj. Rebuilt monument blessed by Pope John Paul II - 3 June 1991. Unveiled and consecrated on 11 August 1991. Social Committee for the Reconstruction of the Monument in Kielce'. The inscription on a plaque fixed on a stone standing near the monument: '1914-1984 / This is where the Monument to the Legion's Deed, designed by J. Raszka, destroyed during the occupation, stood to commemorate the entry of the 'Riflemen' into Kielce on 12 August 1914'.

The 1938 monument was made of stone and covered with granite carpet from Janowa Dolina, and the sculpture was made of patinated plaster. It was about 8 m high. The present one is made of boulder covered with slabs of Swedish granite, in colors similar to the original one. The base is 5.5 m high. The sculpture cast in bronze, 2.8 m high, shows four legionnaires in march, slightly leaning forward, in the uniform of the First Brigade of the Legions, with a weapon in hand, symbolizing the Kingdom of Poland, Małopolska, Śląsk and Wielkopolska.

World War I opened a chance for Poland to regain its independence. On 12 August 1914, the First Cadre Company entered Kielce, a subdivision created by Józef Piłsudski in order to provoke an armed uprising in the Russian partition. The formation was the nucleus of the Polish Legions, and those of the Polish army. The idea of commemorating the presence of the Legionaries in Kielce with the construction of the monument was born in the local legionary circles in the early 1920s. The location was chosen as the place where the riflemen entered the city. In 1928, the Ministry of Military Affairs agreed to erect the monument, but considered the first project presented to be too modest. The proceedings to build the monument were resumed after the death of Józef Piłsudski in 1935. In December 1937, the Committee for the Construction of the Legions' Monument in Kielce was established, composed of significant citizens of the city and the region, coming from the official, military, industrial, landowner and clergy spheres. Honorary members were representatives of the highest authorities of the civil and military state, veterans, and were patronized by the highest Polish authorities and Piłsudski's wife, Aleksander. The author of the monument was a former legionary, sculptor Jan Raszka (1871-1945), who made a plaster model in 1917. The ceremonial unveiling of the monument, which took place on October 2, 1938 in the setting of the military ceremony and mass, was attended by representatives of the authorities and the army, scouts, schoolchildren, representatives of former military organizations, social organizations and crowds of residents. They were broadcast by all national radio stations of the Polish Radio. On the same day the Jozef Pilsudski Sanctuary was opened in Kielce. The monument, according to the same design, was erected in Cracow.

During World War II, after entering Kielce, the Germans destroyed the sculpture. During the Polish People's Republic, the memory of the Legions was fought by the communist authorities. In 1950, the pedestal was ordered to be liquidated. On the foundation for some time stood a wooden model of the Palace of Culture and Science, built in Warsaw in the first half of the 1950s - a skyscraper - 'a gift of the Soviet nation for the Polish nation'. The square where the monument used to stand was neglected. In the early 1980s, the idea of rebuilding the monument was born. On the initiative of the Swietokrzyskie Region of NSZZ 'Solidarność', a collection of money for this purpose was launched, and on 11 August 1981 a model of the monument and a plaque with an information plate about its destruction were erected in place of the monument. In 1988 a social committee for the reconstruction of the monument was established by resolution of the local authorities. Many people from various backgrounds and institutions were selflessly involved in the reconstruction, which is a testimony to the importance attached to its reconstruction. It was financed mainly from social contributions. Attempts were made to ensure that the reconstruction was faithful to the original. The sculpture was recreated by Stefan Maj, a sculptor from Kielce, according to the only surviving bronze cast, borrowed from the Wrocław museum. The monument, which is almost a faithful copy of the pre-war one (a small change in the size of the figures, inscription on the front of the pedestal) stood one and a half meters from its original location. The ceremonial unveiling took place on 11 August 1991, on the eve of the 77th anniversary of the entry of the gunmen into Kielce. Earlier the monument was blessed by John Paul II. In 2004, it was moved a dozen or so meters to the south-west in connection with the reconstruction of the nearby roads, which would make it impossible to organize the ceremony at the monument. In 2004, a symbolic Independence Oak was planted next to the monument, one of eight, planted on the battle route of the formation commemorated at the monument.

The monument called the 'Legionary Four' plays an important role as a venue for local patriotic celebrations, organized on the occasion of various historical anniversaries, connected not only with the subject matter of the monument, including the anniversaries when Piłsudski's riflemen entered Kielce on 12 August. It is then that the main ceremonies are held at the monument with the participation of the highest state, military and local government authorities, which are one of the points on the route of the annual March along the Trail of the First Cadre Company. The idea of the march was born in the interwar period. It was the largest undertaking of this kind in Poland and had the character of a sports and defence competition. The March in 1939 with the participation of over 100 thousand people was the last great patriotic demonstration before the outbreak of war. The idea of the March revived in 1981. Until the fall of communism in Poland it was a form of patriotic and anti-communist demonstration, and its participants were repressed. Since 1989, the March returned to the pre-war formula. The march lasts from 6 to 12 August. It starts in the Oleanders in Cracow and ends in Kielce. It is attended by several hundred people from various circles, including soldiers (also officers of the 1st German-Dutch Corps from Munster), scouts and school youth (also from Vilnius and Podole). The march has the character of a sports-paramilitary competition. It is accompanied by historical knowledge contests. The monument is mentioned among tourist attractions of Kielce. The sculpture of the 'Legionary Four' is also part of the monument of Józef Piłsudski, unveiled on 10 November 2008 in Cracow (50°03′35,79″N 19°55′39,50″E), whose author was accused of plagiarizing Jan Raszka's project. 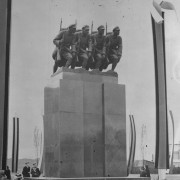 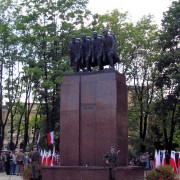