The monument commemorates the rotamaster Witold Pilecki (1901-1948) - a Home Army soldier, a voluntary prisoner and organizer of the resistance movement in Auschwitz, the author of reports on the Holocaust, the Warsaw Insurgent, a soldier of General W. Anders' army. Arrested in 1947, accused by the communist authorities of treason, in 1948 sentenced to death.

The monument stands in Wrocław, on the Old Town Promenade, near the Opera House and the National Forum of Music and Podwale Street and the city moat.

On the inside of the ring there is an inscription: 'For even if it were to happen, I would rather lose my life - than live and have a wound in my heart - Rotmeister Witold Pilecki 1901-1948'. On the pedestal a plaque with W. Pilecki's biography in Polish and English: 'Rotamaster Witold Pilecki (1901-1948). One of the bravest people in the world, an officer of the Polish Army and a landowner, a participant in the Polish-Soviet War of 1920 and the war of 1939, co-founder of the Secret Polish Army, an officer of the Union for Armed Struggle/Home Army. In 1940, he prepared and executed a plan to get to the German Auschwitz concentration camp. Voluntary prisoner and organizer of the camp conspiracy, author of the first reports on the mass extermination of Auschwitz prisoners and the Holocaust, which were passed to the West. After escaping from the camp in 1943, he served in the "NIE" (shorten from 'Niepodległość' - 'Independence') organization, a participant of the Warsaw Rising, a soldier of the 2nd Polish Corps in Italy. In autumn 1945, he returned to Poland to document the Soviet occupation. He was arrested in 1947. Sentenced to death by the communist authorities, he was executed on 25 May 1948 in Warsaw and buried in an unknown place. In 2006 he was posthumously awarded the Order of the White Eagle. Faithful to Poland and the idea of freedom, he gave up his life in the fight against two totalitarianisms of the 20th century'.

The monument called the Ring is a 3.5-metre diameter iron rim made of black steel, placed on a granite plinth. On the inside of the rim there is an inscription, a quotation from a letter that Witold Pilecki wrote in 1947 and an anchor of the Fighting Poland. It is supposed to symbolize the constant memory of the rotamaster and emphasize that what he fought for remains always valid. It is a reference to the tradition of 'patriotic jewellery' - modest, usually black, worn by women in Poland during the partition, war or martial law.

Situated in the centre of the city, the monument is located on the route of many excursions, present in city guides. It is a frequent place of school excursions. In front of the monument, local celebrations are held on the anniversary of important events, wreaths and flowers. A meeting place for the inhabitants of Wrocław. 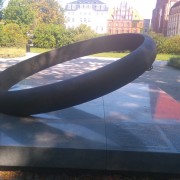 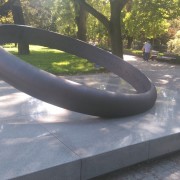