The monument stood opposite the former Dominican Church (now the Greek Catholic Cathedral of the Immaculate Conception of the Blessed Virgin Mary).

To the Chief of the Nation - the Land of Podolia.

A monumental statue depicted Józef Piłsudski on horseback. The sculpture (3.4 meters high) stood on a pedestal 5 meters high. Below the plinth, against the background of the wall, the plinth was flanked by two figures: a legionary (left) and a soldier of the 54th Infantry Regiment (right).

The legend of Józef Piłsudski, intertwined with the founding myth of the Second Republic of Poland, was built while he was still alive and with time it turned into an institutionalized cult. The erection of the Marshal's monuments became common. The monument in Tarnopol was erected on the initiative of the command of the 54th Infantry Regiment stationed in the city, with the support of local authorities who wanted to emphasize the importance of the city in this way. The Regional Monument Construction Committee was established while Piłsudski was still alive. The competition for the project, decided in 1933, was won by artists Bazyli Wojtowicz and Józef Proszowski, but for unknown reasons the monument was finally erected according to the design of architect Apolina Głowiński. The ceremonial unveiling of the monument, which was postponed several times, took place after Piłsudski's death. The ceremonies took place on 11 November 1935. (on the 17th anniversary of regaining independence) was attended by the provincial authorities and thousands of residents of Podolia. It was emphasized that the building was erected without government subsidies, exclusively from the contributions of residents.

After the aggression of the USSR on Poland on 17 September 1939, Tarnopol found itself under Soviet occupation. In the occupied territories, the Soviets began to blunt the traces of Polishness, replacing them with Soviet emblems. On 6 January 1940, the Pilsudski monument was knocked down from its pedestal with a tank and steel ropes. In its place the Lenin monument was erected. Just before the fall of the USSR in today's western Ukraine, part of the Lenin Monument was demolished. The Tarnopol Monument shared their fate on 8 August 1990. In 2002 a monument to King Daniel I of Ruthenia (1201-1264) was unveiled in its place.

In 2018, as part of the celebration of the 100th anniversary of Poland's regaining independence, a Piłsudski monument modelled on the pre-war one stood in the centre of Nysa, at the site of a monument to Emperor William before the war. In commemorating Piłsudski, it was also intended to be a tribute to the Kresy (lost territories of Poland in the East) inhabitants, who lived in the Nysa district in large numbers. The undertaking brought Nysa and Tarnopol closer. On 29 September 2017 a partnership agreement was signed by the authorities of both towns. 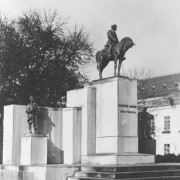