The monument is dedicated to Colonel Leopold Lis-Kula (born 1896, died 1919), a scout, an officer of the Riflemen's Union, the Polish Legions and the Polish Army, a hero of the struggle for Polish independence, posthumously promoted to colonel.

The monument stands on the square in the City Centre, among greenery, surrounded by tenement houses.

The inscription on the pedestal of the monument: "Colonel Leopold Lis-Kula, born on 11 November 1896 in Kosin near Rzeszow, died on 7 March 1919 near Torczyn - legionary shooter Polish soldier in all his works an example of virtue in fighting a model of heroism". The inscription on the information board: "The monument to Colonel Leopold Lis Kula, erected in 1932 by Edward Wittig, was destroyed by the Nazis in 1940. The present one, set up in 1992, is a replica of the previous one made by Bogusz Salwiński and Janusz Wilczyński. Leopold Lis - Kula 1896 - 1919". [also in German and English].

The colonel's figure is on a pedestal. He's in uniform, drawing a sabre.

Colonel Lis-Kula died in III 1919 in fights against Ukrainian troops for the eastern border of Poland. The funeral ceremonies became a great patriotic manifestation. The initiators of the foundation of the monument were comrades-in-arms and junior high school friends. The monument's construction committee, established in 1927, was headed by Aleksandra Piłsudska (the Marshal's wife). The creation of the monument was entrusted to the sculptor Professor Edward Witting. The monument was unveiled on 18 September 1932 by President Ignacy Mościcki. The ceremonies, which were opened by a field mass and ended with a parade, were attended by representatives of the generality, the Sejm and the Senate, the government, local authorities and about 40 thousand people (more than the city counted at the time).

In the pre-war period, the cult of Lis-Kula was very much alive. It became one of the most important personal models for the young generation of the time, promoted in the 1930s in the current curriculum of history teaching in primary and secondary schools. The Leopold Lis-Kula monument thus became not only one of the symbols of Rzeszów (the city the hero was associated with) but also a place of patriotic manifestations and anniversary celebrations. During World War II, Rzeszów was under German occupation. On the night of 10-11 April 1940, the monument was demolished. Before the remaining scrap was sent to Germany, the head of the monument was stolen, which was later stored in the basement of the Rzeszów Museum, where it is now presented. In the People's Republic of Poland, Lis-Kula was condemned to be forgotten, but thanks to the independence circles, the memory survived. The idea of rebuilding the monument was born in 1980, but it became possible only after the fall of communism in 1989. On the occasion of John Paul II's upcoming visit to Rzeszów in June 1991, it was decided that the statue of the Lis-Kula monument would be a gift from the Solidarity Region Board. The miniature was taken according to old photographs. A Committee for the Reconstruction of the Monument was also established. In order to raise funds, a reprint of a book about Lis-Kula from 1932 was published, which was distributed as a contribution in Poland and abroad. The competition to make a replica was won by sculptors from Cracow: Bogusz Salwiński and Janusz Wilczyński. The ceremony of unveiling and consecrating the monument on 22 November 1992 was attended by the president in exile Ryszard Kaczorowski. The monument, like the grave of Lis-Kula in the Rzeszów cemetery, has again become a place of collective memory.

National holidays and scouting celebrations are held at the monument. The tradition of solemn celebrations of the anniversary of the hero's death has been restored, which annually gather up to several thousand participants, including school delegations. It has also become an important meeting place for reborn " riflemen " associations (a paramilitary social and educational organization, referring to the structures operating during the struggle for independence). The monument is one of the points of the tourist-historical route between Kosina and Rzeszów from the length of 39 km, under the patronage of Colonel Lis-Kula. Its originator was the Podkarpacki Oddział Związku Piłsudczyków (Podkarpacki Branch of the Piłsudski Association) (an organization whose aim is to cultivate the Piłsudski and independence tradition and to educate patriotic and pro-defensive youth). On the trail, cyclical rallies are organized, which combine educational and educational goals with sports and fitness. The marches, which are to promote modern patriotism and defence issues, are accompanied by historical competitions, occasional concerts, historical talks, memories of Colonel L. Lis-Kula's relatives, sports competitions. The event is attended by school youth, riflemen, scouts, educators and tourists. Bicycle rallies are also organized. 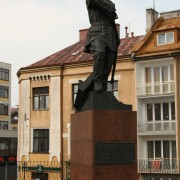 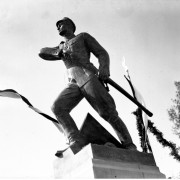